The “Stuff” of Museums: Collections, Interactivity, and a Call to Action 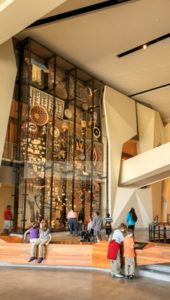 By Sarah B. George
From Dimensions
July/August 2015

People love stuff. It speaks to them; it reminds them of special moments or people in their lives. They collect it and they love to tell stories about it and show it off. Museums’ deepest roots are in the stuff of collections. But over the last 200 years, the value and importance of collections to effective science interpretation (including exhibits, education, and outreach) has waxed and waned. It is clear from recent studies that using collections in concert with media and interactivity in exhibits and programs yields an extremely effective visitor experience. The recent work of Reach Advisors, published in the May/June 2015 issue of Dimensions, illustrates the impact of collections on people’s emotional memories of museums, and underscores the value of combining objects with hands-on experiences (Wilkening, 2015).

Today, many natural history museums and science centers are melding collections-based and interactive approaches to interpretation, making collections and related research more accessible and engaging to the public. In a time of great global change, collections can be not only an important part of a memorable museum experience but also a powerful tool for inspiring the public to act on critical issues.

The evolution of science museums

The earliest museums available for public viewing were “cabinets of curiosity.” Collectors offered the opportunity to see their oddities, their “stuff,” for a small fee to help support the upkeep and expansion of their collections. From the 18th into the 19th centuries, the presentation of these collections often was enhanced with entertaining spectacles to increase profits, such as the Infernal Regions display of the Western Museum of Cincinnati, which depicted Hell with mechanical wax figures and sound effects, or P.T. Barnum’s “entertainments,” including his well-known freak shows, at the now-defunct American Museum in New York City (separate from the American Museum of Natural History). It wasn’t until the late 19th century, however, that science museums became focused on both scientific discovery and the instructional interpretation of their now systematic collections of natural history specimens (Alexander, 1997).

With that transition, the dominant voice in museum exhibits became that of the scientist/curator, and the learning was one way or lecture style through static labels in exhibit cases. Educational programs, both onsite and outreach, were didactic as well, with participation limited to the rare opportunity to touch a specimen.

Science centers grew out of the 1960s, focused on teaching the principles of the physical sciences, math, and engineering through hands-on experiences for the public. The learning was by doing rather than by simply seeing, reading, or listening. The authoritative voice was muted and primarily from an educational perspective. Science centers did not accumulate or study collections, though those with their origins in museums of industry or in natural history museums usually held collections and had some relatively didactic exhibits of objects on display.

A melding of approaches

Over the last several decades, there has been a gradual transfer of what is best in science center interpretation to natural history museums and vice versa. Natural history museums have added hands-on activities, in-gallery presenters with touchable collections specimens, and electronic media such as videos and touch-screen interactives to their galleries, never losing sight of the fact that their exhibits are rooted in collections. Many have leveraged their non-research collections into highly popular hands-on “discovery” galleries such as the new Q?rius space at the National Museum of Natural History, Smithsonian Institution, Washington, D.C., which has had to increase its hours to meet demand.

Meanwhile, science centers have been adding life and geological sciences to their content, and rediscovering collections’ impact on and attraction for the public. Ever-popular, dinosaurs often show up in science centers—sometimes the real thing, sometimes the animatronic version. Witness the successful focus on a robotic Tyrannosaurus rex and Triceratops in the public phase of the campaign to open the new Saint Louis Science Center in Missouri in the late 1980s. In addition, personalization is a buzzword in today’s digital world, but people still often prefer the tangible over the virtual. In that spirit, trading posts like the Collectors’ Corner at St. Paul’s Science Museum of Minnesota represent a very personalized approach to collections where the public can bring in found natural history objects and trade them for other intriguing specimens.

Three examples of new museums that have thoroughly melded interactivity with collections are Salt Lake City’s Natural History Museum of Utah, where I serve as executive director; Dallas’s Perot Museum of Nature and Science; and Trento, Italy’s Museo delle Scienze (MUSE). All three combine a wide variety of sensory experiences with interactivity, media, live organisms, collections, and encounters with experts or artists throughout the galleries, blurring the lines between traditional science centers and natural history museums. (Note that the Perot is in fact a merger of two such institutions).

In Utah, we have conducted extensive evaluation studies of the public response to this multidisciplinary approach. The results demonstrate high impact, measured in terms of how well visitors comprehend and communicate the overarching messages, by the high level of demonstrated visitor behaviors indicating engagement with the exhibits, and by the optimum sweep rate indices (gallery area covered per minute) in the museum (Becker, Serrell, & Bechtol, 2014; Serrell, Becker, & Bechtol, 2013).

After several hundred years of collecting, we now have extensive series of specimens documenting changes in distribution, extinction, and even evolutionary change in short-generation species. New analytical technologies such as ancient DNA sequencing, radiometric dating, and stable isotope analysis have given museum collections additional significance, as scientists now use them to document and measure the type, degree, and rate of environmental change, both past and present. (See the 2007 Buffon Declaration).

When science centers and museums use this new information in well-designed installations, collections have the potential to serve as a call to action for the public. The new Nature Lab at the Natural History Museum of Los Angeles County is a prime example of how collections document local change (such as the spread and impact of invasive species) and encourage the public to participate in monitoring this change. Visitors are invited to take part in an array of citizen science programs and even proactively create habitats at their own homes to support threatened monarch butterfly populations.

Another way to deepen visitor engagement with collections and related societal issues is by providing opportunities for visitors to talk to the scientists who collect and study specimens. The Darwin Centre’s daily programs at the Natural History Museum, London, and the North Carolina Museum of Natural Sciences’ SECU Daily Planet multimedia theater and investigative labs in Raleigh are particularly forward-thinking examples of how museums can connect collections-based scientists to the public.

For science centers interested in incorporating collections and scientists into their galleries, there are often local resources that may be tapped. The Integrated Digitized Biocollections network (iDigBio) has a comprehensive list of all natural history collections in the United States; some information on international collections is available through the Global Biodiversity Information Facility. Many university-held systematic collections have no public galleries. The faculty and graduate students that work with these collections often seek ways to communicate their current research to the public and are willing to share their specimens and expertise. State and federal agencies often hold collections and have many expert scientists on their staffs that are eager to participate in science center public programming. And finally, a number of collections-based museums are members of Pacific Science Center’s Portal to the Public and are great resources for creative ways of connecting scientists to the public.

A call to action

We live in a time of extraordinary change, and science museums are committed to explaining that change to our visitors. We, as a community, must also be committed to helping the public understand how their daily choices impact climate change, for example, or how they may become involved in municipal decisions. It isn’t easy in this time of political extremism in the United States and elsewhere, and we certainly don’t want to develop a stridency that causes the public to lose its trust in museums, but collections can be a familiar, unthreatening, and inspiring means of making calls to action.

People love the real thing. They find extraordinary beauty in specimens and artifacts, and the best exhibit designers take full advantage of this. Dioramas (still highly attractive to today’s audiences), skeletal mounts (who can forget the first time they saw a mounted dinosaur skeleton?), arrays of butterflies or marine shells or fossil fish, and even maligned species such as stuffed rats or dried spiders hold enormous fascination for the public that does not seem to waver. Using this fascination to invite people to ask why and how and what now is what science museums can do best. Employing collections to encourage people to ask, “What can I do?” is what science museums need to do next.

Sarah B. George is executive director of the Natural History Museum of Utah, Salt Lake City, and adjunct professor of biology at the University of Utah. She has trapped rats, bats, and shrews all over the world for her research and formerly was curator of mammals at the Natural History Museum of Los Angeles County, but she got her start in science museums as a teen spending hours in the (sadly, no-longer-there) Math Room at Pacific Science Center, Seattle.

Serrell, B., Becker, B., and Bechtol, E. (2013). Whole museum tracking study for the Natural History Museum of Utah.

About the image: The Canyon Collections Wall, located at the entrance to the exhibits at the Natural History Museum of Utah, demonstrates the breadth, depth, and beauty of the museum’s research collections. Photo by Stuart Ruckman/NHMU