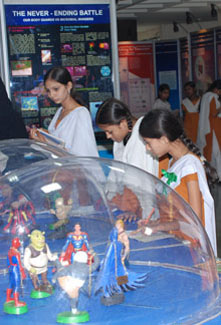 By Ramdas Iyer
From Dimensions
November/December 2011

In India, immunization against infectious diseases has been practiced, knowingly or unknowingly, for at least 4,000 years. Every village in ancient India had a temple to a certain goddess—for example, in southern India, the temple was to Mariamma, the epidemic goddess, while in northern India, the temple was to Sheetla Devi, the cool goddess who counteracted the wrath of hot-headed gods believed to cause smallpox. The temple was usually outside the village limits, possibly to limit infection, and was open air, exposing it to the harsh sun and rains.

When smallpox broke out in a village and a patient was cured of the disease, he or she was made to tap his or her head on a stone called the bali peetham outside the temple. Several rituals were then practiced during which all villagers tapped their heads lightly on the same stone. This practice—called variolation and done in various ways around the world—introduced a weakened strain of the virus into healthy people to guard them against smallpox.

Despite the long history of immunization practices in India, certain sectors of today’s population have religious reasons for rejecting modern vaccinations or hold superstitions about vaccines. For example, a study in the early 1990s concluded that more than half of all Indian children ages 12 months to five years had not been fully immunized, and in rural areas over one-third had received no vaccinations at all. The situation is improving, but it’s still necessary to promote immunization.

The challenge of explaining immunology

In 2008, India’s National Council of Science Museums, a network of 27 science museums across the country, wanted an interactive traveling exhibition on the human immune system and asked me to curate it. The exhibition’s objectives would be to create an understanding of how the immune system works and to allay hesitations and fears about vaccinations. Its audience was to include India’s children and adults, educated and functionally illiterate, rural and urban. The exhibition was also to travel nationwide, be displayed in 27 cities and towns, and be seen by potentially millions of people.

India is a global hotspot for emerging infectious diseases, as reported in a 2008 study in the journal Nature, so the idea for the exhibition was timely. However, creating a popular exhibition to present such a difficult subject to such a wideranging audience required deep thought. The challenge was how to present immunology in a fun way so that average people, some with low levels of literacy, could understand it and also respond positively to the concept of immunization.

Gods and heroes, demons and villains

India is a country where many people, though functionally illiterate, are highly informed about traditional knowledge systems and have a rich cultural tradition that includes exposure to many mythical stories with morals. Sometimes, however, the traditions and stories act as impediments to delivering healthcare. Many people, especially in rural areas, tend to take religious myths literally and look to divine intervention, seek non-scientific medical solutions, or simply resign themselves to their fate rather than accept scientific medical care.

Considering the power of these cultural traditions, we hit upon the idea of using them to overcome the impediments. We focused on creating an exhibition using the traditions and stories themselves to explain immunology concepts and counter misinformation.

India has two great mythological epics, the Ramayana and the Mahabharata, both dealing with the ongoing fight between good and evil and the ultimate triumph of good. Often, the forces of good are given special weapons by the gods to aid their fight. Although these stories are notionally from the Hindu religion, all Indians, regardless of religious denomination, know these epics well.

Therefore, we created an exhibition called Our Bodyguards using an approach that portrays pathogens as demons or villains from Indian mythology and immune cells as gods or heroes. An infection inside the body is depicted as an epic battle between the two sides, and vaccination is shown as a divine weapon empowering the good over the evil.

The exhibition explains how, much of the time, the “good” side wins, sometimes with outside help like antibiotics or vaccinations. If the “good” side loses the battle, though, the “bad” side takes over. The exhibition portrays this end with a mannequin of a seated man who dissolves into a skeleton, thanks to mirrors and lights. This exhibit is accompanied by a description of what happens to the body at death, when the immune system stops working.

Using the events in the epics of Ramayana and Mahabharata as metaphors for the fight between pathogens and the immune system creates an immediate connection in the minds of visitors and maximizes understanding. The exhibition also depicts other stories that are instantly recognized by Indians, such as the story of smallpox variolation, to help explain immunization.

To attract children, among whom cartoon characters are popular, the exhibition also shows pathogens as evil characters and immune cells as superheroes. For example, the exhibition opens with a lifesize fiberglass Superman holding a bacterium (Doomsday, a villain that Superman battles) and a virus (Eradicator, another supervillain) on leashes.

To connect with a diverse audience that speaks many languages and has varying levels of literacy, the exhibition includes a lot of visuals— including cartoon graphics and three-dimensional fiberglass characters—and several interactive audiovisual displays. A particularly popular exhibit has a touch screen for visitors to select an immunology question, which an expert answers in Hindi. Exhibit labels are multilingual, in English and the local languages of each region the exhibition visits. Publications with images from the exhibition are also available in local languages.

In addition, the science museums that host the exhibition organize events, including lectures for a lay audience by renowned immunologists, film showings, and open-house quizzes where educators ask immunology questions to visitors on the exhibition floor and give away prizes for correct answers.

The exhibition opened at the National Science Centre in New Delhi and remained there for 45 days, during which over 150,000 people visited. At least 500,000 more visitors saw the exhibition at its next eight venues.

Though formal visitor surveys have not been conducted, informal interaction with visitors, especially schoolchildren, shows that the information is well understood and the importance of immunization is realized. For example, one 11-year-old student told an educator, “I thought only important people had bodyguards. Now I know I also have a lot of bodyguards.”

Our Bodyguards is the first exhibition of the National Council of Science Museums, and likely the first in India, to use the approach of relating modern scientific concepts to traditional mythology and cultural iconography. We believe this approach has helped visitors understand and appreciate the concepts more than they would have from a conventional exhibition.

About the image: In order to appeal to children, Our Bodyguards depicts immune cells as superheroes. Photo courtesy National Science Centre, Delhi