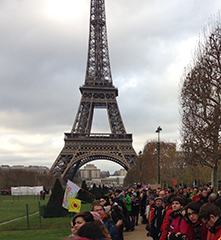 By Patrick Hamilton
From Dimensions
January/February 2016

Humanity crossed a remarkable but relatively unheralded milestone back in 2009. For the first time in human history, more people had come to live in cities than in rural areas. And this great global migration is continuing and in fact accelerating. By 2050, 6 billion people—two-thirds of the world’s population—are expected to be living in cities. This global demographic shift is so rapid that many consider it a threshold moment for humankind. Others are beginning to conceptualize and describe cities as Earth’s newest biome (Pincetl, 2015). I contend furthermore that cities potentially constitute a supra-biome, given that they now drive changes in all other biomes on the planet.

Engines of innovation, drivers of change

Cities are now both the engines of global innovation and the drivers of planetary environmental change. Cities are where futures are invented—technologically, economically, culturally, socially, and environmentally. While cities occupy only 3% of Earth’s land area, their populations draw in food, fuel, and fiber from every corner of our planet. Because of their aggregate demands for resources and their role as the capital markets for countless global goods and services, cities drive the conversion of native landscapes into agricultural ones, the extraction of resources from throughout the oceans, and the release of billions of tons annually of heat-trapping gases into the atmosphere.

More urban infrastructure will be built in the next few decades than in all of human history, so the decisions made in the next few years about how we design, build, and maintain our cities will play a prominent role in how successfully we, as a global civilization, manage crucial issues. One of humanity’s greatest challenges in the coming decade will be how to make cities more livable for more people while dramatically lowering their environmental impacts. How do we make our cities better places in which to live, work, and play?

Great cities develop over many years through the concerted effort of a broad spectrum of stakeholders. Great cities have identities and values that come from, and are shared with, a broad array of engaged citizens and institutions. Our science centers and museums accomplish three things which, taken together, can be instrumental in helping create momentum to support the development of great cities. We are very skilled at framing topics for public understanding. Our exhibits, programs, and events catalyze public attention. And our institutions represent increasingly rare civic spaces where people from all backgrounds and walks of life can gather as peers.

I was pleased to observe cities receiving significant attention while I was at the recently concluded 2015 Paris Climate Conference (COP21). Those assembled during the two weeks of intense negotiations appreciated the significant role that cities must play in accelerating the attainment of the ambitious climate change mitigation goals adopted by unanimous consensus at the conclusion of the conference. But going forward from the COP21 conference, cities will require considerable ongoing attention if they are going to successfully drive global sustainability.

Science centers and museums are well positioned to support and benefit from the need for a heightened focus on cities. Our institutions often have broad geographic audience reach, but for most of our museums—situated as many of us are in the hearts of metropolitan areas—the vast majority of our guests are urban dwellers. We have an opportunity to help our overwhelmingly urban audiences to grasp and appreciate the science of the cities that they call home.

Seeking to engage both public and policymaker audiences in the grand challenge of making cities both more livable and more sustainable, the Science Museum of Minnesota (SMM), St. Paul, is pursuing the development of the Great Cities Initiative, a proposed major traveling exhibition and public engagement project. With initial support from the University of Minnesota’s Institute on the Environment, SMM now is in the process of reaching out to other potential funders about the vital role that the Great Cities Initiative should play in helping cities everywhere—old and new, big and small—strive to be great cities, for the benefit of their inhabitants and for sake of the planet.

As the Great Cities exhibition travels, SMM plans to work with the host museums to elevate and broaden civic conversations about each city it visits. The ability of cities to face the challenges of the future is directly tied to the breadth and depth of the engagement of their citizens. The Great Cities Initiative, along with the host cities’ other initiatives and efforts, will create structures of participation so people from a broad populace can make meaningful impacts on city thinking.

The Great Cities Initiative is predicated on three main ideas:

• Great cities seek to be nimble. Great cities pursue greater agility and adaptability in response to disruptions of all types (e.g., rapid demographic transitions, infrastructure failures, and sudden climate shifts) that are occurring with increasing frequency and decreasing warning.

• Great cities seek to expand the potential for collaboration. Great cities endeavor to lessen the distinctions between public and private, for-profit and nonprofit, to better enable novel partnerships that lead to more urban innovations—projects that would never be realized by one agent or entity alone.

From the perspective of SMM’s Great Cities Initiative, a fundamental feature of a great city is an urban culture where individuals are aware of civic challenges and opportunities, trust that they can make an impact, and choose to be accountable for contributing to solutions. When these elements are in place, communities are able to build civic trust, advance policy, and mobilize funding for specific actions. In the case of St. Paul, work on climate adaptation extends from city departments to neighborhood councils because of a shared realization that no one entity alone can prepare the city for this challenge.

I am delighted that science centers and museums around the world, as demonstrated by the examples in this issue of Dimensions, are using innovative approaches to engage their audiences in humanity’s greatest challenge—the realization of more livable, more sustainable cities for everyone. Never has this goal been more necessary and never has it been more possible.

About the image: Climate demonstrators line up along the sides of the Champ de Mars during the final afternoon of the 2015 Paris Climate Conference. Photo by Patrick Hamilton.