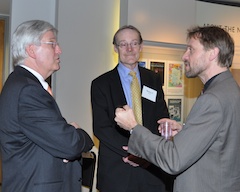 Thousands of scientists, educators, and decision-makers from around the world have converged on the U.S. capital this week for the 177th American Association for the Advancement of Science (AAAS) Annual Meeting. In honor of the conference, which explores “Science Without Borders” with representatives from more than 50 countries, ASTC invited participants to spend yesterday evening at the Marian Koshland Science Museum of the National Academy of Sciences.

The crowd included representatives from diverse organizations interested in the role of science centers and museums in engaging the public in science, from the National Science Teachers Association to the Embassy of Sweden. After a welcome by Koshland Science Museum director Patrice Legro, ASTC CEO Bud Rock and Martin Storksdieck, director of the Board on Science Education at the National Academy of Sciences/National Research Council, led participants in a dialog on how science centers support the integration of informal learning into our lifelong learning paths.

The science center community aren’t the only ones celebrating science this week, though. AAAS will host its Family Science Days February 19 and 20 at the Walter E. Washington Convention Center in Washington, DC. This community science showcase features a broad range of educators, including several ASTC members, working to promote an interest in science among the general public. The event is free and open to the public.