One of the recommendations made during the High Level Forum of the 2016 International Science Center and Science Museum Day (ISCSMD), held at UNESCO Headquarters in Paris last November 10, was to look for opportunities to continue showcasing science centers’ work in communicating and educating about the global Sustainable Development Goals (SDGs) adopted by the world’s nations.

The UN Forum on Science, Technology, and Innovation (STI) seemed to be a great opportunity for this. Held Monday and Tuesday, May 15 and 16, this international conference is dedicated to harnessing STI for achieving the SDGs over the next 15 years. 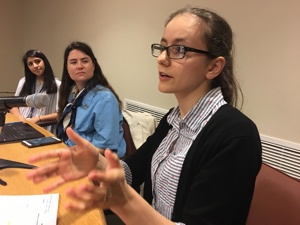 We quickly identified SDG #5, Gender Equality, as the topic we could address best as a field during the STI Forum. Our point of view was that science, technology, engineering, and math (STEM) programs and science education initiatives in general can help girls to bridge the gender gap, not only in science careers but in society as a whole. We also wanted to showcase how girls who participate in such programs—regardless of the career choices they make in their lives—will be better equipped to help achieve all 17 SDGs.

In the process of setting up the ISCSMD last year, we were able establish a series of partnerships that are proving to be extremely helpful in this regard. Both the United Nations Major Group for Children and Youth (UN MGCY) and the International Council for Science (ICSU) have major initiatives related to advancing gender equality in science.

The UN MGCY has launched its Youth Science Policy Interface Platform that shows the roles of young women scientists of all disciplines in support of global sustainability. It has facilitated inputs from more than 100 organizations through the Youth Commission on Science, Engineering & Technology, via surveys, offline consultations, and blogs related to the Forum. This includes an overview of barriers that girls and women face in engaging in STEM, opportunities to use STI to close the gender gap, and ways to address different aspects of SDG #5, Gender Equality, including gender based violence, equal pay, land rights, and more. They have further explored how empowering young women leads to benefits in implementing the SDGs and how the mechanisms for doing so differ across contexts (urban/rural, disaster/humanitarian, etc.).

ICSU has stated explicitly in its statutes that it “promotes equitable opportunities for access to science and its benefits, and opposes discrimination based on such factors as ethnic origin, religion, citizenship, language, political or other opinion, sex, gender identity, sexual orientation, disability, or age.” These commitments have resulted in collaborations such as the Gender in Science, Innovation, Technology and Engineering (GenderInSITE) initiative to promote the role of women in these fields, demonstrating how applying a gender lens to SITE can provide deeper insights, more effective programs, and more sustainable outcomes in the context of development. Further ICSU studies have focused on identifying where applications of STI can improve the lives of women, men, girls, and boys. They are identifying and considering the gender dimensions of research and development, how agendas and priorities are set, and how costs and benefits are distributed across populations (including to women, men, girls, and boys). In addition, they are exploring the opportunities and expanding the roles for women to contribute to the human capital needed to advance STI for development.

Because of these partnerships with UN MGCY and ICSU, ASTC was able to organize a side event at the STI Forum at UN headquarters in New York on Tuesday, May 16: “Women, Girls, and Science: Contributing to the UN Sustainable Development Goals.”

The session was moderated by Kristen Grennan, representing the World Association of Girl Guides and Girls Scouts (WAGGGS), who shared WAGGGS’ use of data collection via social media to capture girls’ voices around the world, and then giving that data to girls to advocate at international conferences on behalf of girls worldwide.

Guy Labine, chair-elect of the ASTC Board of Directors and CEO of Science North, Sudbury, Ontario, Canada, introduced the discussion by describing the worldwide science center and museum field, its efforts in science education and gender equality, and some specific examples of science education programs for girls that are offered by Science North.

ICSU was represented by Dr. Miyoko O. Watanabe, deputy executive director and director of the Office for Diversity and Inclusion at the Japan Science and Technology Agency. She focused on the equal opportunity problems in Japan such as the low representation of woman in research and technology companies and insisted on the need to support girls in helping them to choose science careers. However, she mentioned that there are cultural factors and that special efforts are needed to make mothers understand that this was a valid path for their daughters.

Maria Bilal (Australia) from G(irls)20, a Canadian-based, globally active social enterprise that cultivates a new generation of female leaders spoke for the UN MGCY. She described the multiple avenues that the organization has imagined to increase the voice of youth and girls in the UN system. These include engaging young practitioners in formal science-policy avenues within the UN system; sharing their perspectives and reporting formally at UN meetings; identifying challenges and solutions towards implementation of the SDGs; exploring the role of tech transfer, science communication, intellectual property rights, innovation policy, and other cross-cutting topics; and discussing implications of STI and data from different contexts, including humanitarian, territorial (urban/rural), disaster reduction, climate change, and more.

Dorothy Bennett, director of creative pedagogy at the New York Hall of Science in Queens, New York, presented a science center perspective and described ways that girls are invited to join into STEM programs. She showed a number of examples such as the Design Lab, which is different from traditional making spaces. Everyone is invited, including those who don’t already know they like engineering and making, and every space starts with the question, “What will you design?” Practice shows that different participants may have divergent solutions, and what the science center learned is that girls choose things that really matter, that make a difference.

Daria E. Cirnatiu, one of the teenage World Biotech Tour ambassadors at the Montréal Science Centre explained how the international ASTC project and her science center experiences have given her skills to be confident in considering science as a tool to solve problems. She talked about her meetings with biotechnology scientists, what she has learned at the science center about communicating a scientific topic to very different audiences, and the empowering outcomes her experiences have produced, including a belief that she can be part of solutions for real problems such as those addressed by SDGs.

Closing remarks were given by Gillian Thomas, interim CEO of ASTC.