As our global community continues to become interconnected on many levels, public engagement with and understanding of biotechnology is central to improving standards of living and quality of life and to building a better future.

The World Biotech Tour (WBT) endeavored to connect biotechnology around the world through local festivals, events, and programs in diverse locations around the world. While the global theme is biotechnology, each science center has added its unique culture and style in interpreting and executing the requirements of the project.

This has been visible in the final three festivals of the 2017 tour which took place over the weekend at science centers in three cities: at the Copernicus Science Centre in Warsaw, Poland; Heureka, the Finnish Science Centre, in Vantaa, Finland; and Domus – Museos Científicos Coruñeses in A Coruña, Spain. While the three host sites share the same continent, each festival unfolded differently, showing the cultural diversity that the WBT strives to celebrate under the common theme of biotechnology.

To start, the festivals shared the theme of biotechnology and the Lab-in-a-Box activities developed by ASTC and distributed to all 12 science centers participating in the three-year WBT initiative. (These activities can be found on the WBT website with free resources to download so that any science center, teacher, family, and lifelong learner can recreate the WBT wherever they are in the world.) With these activities to build upon, the science centers begin to customize their own particular events. 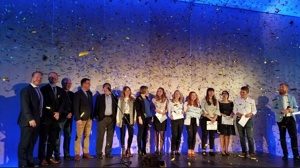 The Copernicus Science Centre scheduled the festival to run for four days concurrently with the Warsaw Science Festival and the Children’s Festival. Along with biotech workshops on living bioluminescent organisms and a hidden biotech scavenger hunt through their exhibits, festivalgoers were treated to a biotech-inspired cello concert by Agata Kurzyk, a scientist and cellist. Special guests were also invited to listen to the WBT ambassadors present their biotech topics in a Famelab style to compete for the opportunity to represent the science center at the upcoming Science Centre World Summit (SCWS) in Toyko, November 15–17. 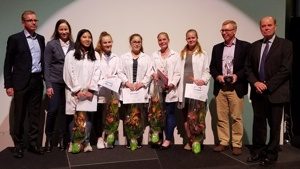 Heureka the Finnish Science Centre, created a mobile hidden biotech scavenger hunt that can be played in the science center or from home. Festivalgoers from both the European Researchers Night (ERN) and the WBT could walk around the activity tables and meet local scientists and biotech companies presenting hands-on activities and interact with several Aalto-Helsinki iGEM teams. Workshops focused on bacteria and eco plastics, and people of all ages could build a DNA double helix model with candy. The Heureka WBT ambassadors also presented their biotech topics in the museum’s event square, and the winner was announced during the evening ceremony event. 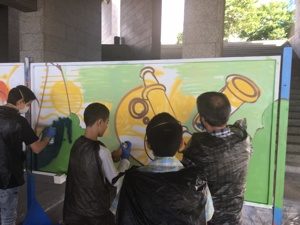 Domus—Museos Científicos Coruñeses hosted the WBT festival in their museum dedicated to the human being. Along with the Lab-in-a-Box activities, the science center included science cafés, biotech shows, the opportunity to meet local scientists, and a chance to create a biotech graffiti artwork. Festival attendees were able to meet the ambassadors and engage in their hands-on, biotech topics that ranged from medical devices to therapies to treat cancer with stem cells and nanotechnology.

Finally, another unifying aspect of the three different festivals was the presence of the local Biogen employees who volunteered to participate in the WBT. Many had Biogen employees facilitate an activity that tested people’s genetic trait for tasting bitterness with the PTC taste test; others included the employees in science cafés and discussions about biotech in industry and as a STEM career.

The diversity of these three festivals adds to the larger mosaic that the WBT has created through the 12 international locations in the three years since its launch in 2015. The project has been able to unify communities and science centers and empower youth from across the globe through biotechnology while also celebrating how different cultures can innovate new biotechnology that affects all people across all borders.