Due to technical difficulties, ASTC On Air with María Ignacia Edwards, will be rescheduled.

The European Digital Art and Science Network is an international initiative offering artists the chance to spend several weeks at the CERN, the ESO, and the Ars Electronica Futurelab. The network aims to connect scientific concepts and ideas with approaches used in digital art. Fostering interdisciplinary work and intercultural exchange as well as gaining access to new target audiences are among the Network’s declared goals. It also emphasizes art’s role as a catalyst in processes of social renewal. By creating images and narratives dealing with the potential risks and rewards inherent in technological and scientific development, artists exert an important influence on how our society comes to terms with these innovations. 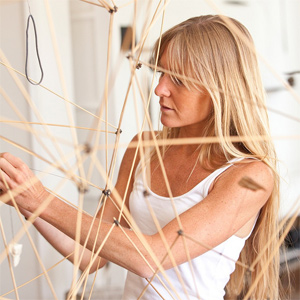 María Ignacia Edwards, an artist from Santiago, Chile, was selected from the 140+ applicants from 40 countries who responded to an open call. She spent her residency at the ESO in Chile and the Ars Electronica Futurelab in Linz, Austria. María works with equilibrium, the lightness and weightlessness of objects that she brings into balance by deploying their own weight or counterweights. Though, at first glance, her works may be perceived as purely aesthetic, artistic objects, her constructions are the result of elaborate mathematical and physical calculations. On one hand, the artist is inspired by astronomy; on the other hand, she aims to create works that get others interested in astronomy. Jurors found her to be the perfect candidate to launch the Art & Science Network’s residency program in the right trajectory.

After receiving her Bachelor of Arts degree from the University Finis Terrae in Santiago and her Diploma in Cinema, Art Direction, and Photography from the University of Chile, she lived and worked in New York City from 2009 to 2012. During this time, she also completed an artistic residency at the School of Visual Arts and in the Lower East Side Printshop. In 2012, she was invited by the Arts Cultural Center in Mexico, Reinosa/Tamaulipas, to stage a solo exhibition, In Between, as part of the Tamaulipas International Arts Festival.

Her artworks have also been exhibited in Chile, Spain, the United States, Argentina, Peru, and Mexico. She has also taken part in international art fairs— Pinta Art Fair in New York, ArteBA in Buenos Aires, Art Lima in Peru, and ChaCo in Chile. Recently she was awarded the “Art for Science“ prize by the National Commission for Scientific and Technological Research in Santiago.