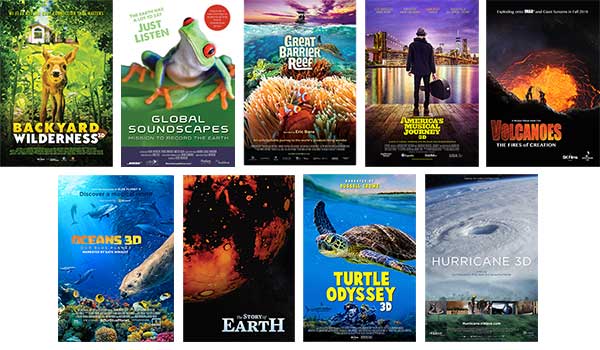 Backyard Wilderness
Backyard Wilderness will astound and entertain viewers with the unexpected wonders of nature that are right under our noses: in our own backyards. Spanning a seasonal year around a suburban home, the film displays a stunning array of unique wildlife images and behavior. Captured by cameras mounted inside dens and nests, and moving along the forest floor and pond bottom, we reveal the lives of its inhabitants in rare and breathtaking intimacy. We follow Katie, a young girl, and her modern family living next to the woods who are blind to the real-life spectacle around them, absorbed by an array of electronic devices in their busy lives. Katie gradually discovers the intricate secrets that nature has hidden so close to her front door, and we experience the joy she finds in her interactions with this new world. The film reminds us that Wi-Fi is not the only connection that matters and that sometimes, in ordinary places, you can uncover extraordinary things that could transform you forever. You just need to step outside.

Global Soundscapes
Immerse yourself in the amazing sounds of our planet! Through giant screen images, surround sound, and live presentation, Global Soundscapes takes you on an ear-opening journey into the science of sound and the emerging field of soundscape ecology. Embark on a mission to investigate the dramatic soundscapes of Costa Rica’s rainforests, Hawaii’s coral reefs, and Mongolia’s vast grasslands. Learn about the tools that scientists use to record and analyze sounds. Explore basic acoustics through interactive activities and incredible slow-motion footage of pulsating musical instruments, vibrating vocal chords, and slobbering “raspberries.” Discover what soundscapes tell us about the health of our planet. With Global Soundscapes’ unique format—combining giant screen images, surround sound, and live presentation—you’ll hear the Earth in a whole new way!

Great Barrier Reef
No structure built by living creatures compares to the size and majesty of the Great Barrier Reef—spanning more than 1,400 miles off the coast of Australia and home to countless unique species of aquatic life. Narrated by acclaimed Australian actor Eric Bana, Great Barrier Reef explores the awe of this natural environment and introduces the visionaries and “citizen scientists” who help us better understand and protect the reef. Grab your mask and snorkel and join an unforgettable adventure with majestic manta rays and sea turtles, witness the birth of baby seahorses, participate in a coral watch expedition, and discover the exotic splendor of fluorescent corals at night as Great Barrier Reef captures the natural beauty and exquisite strangeness of this awesome and vibrant living world. A December Media film produced in association with Slattery Family Trust, Biopixel, Soundfirm, Film Victoria, and Screen Queensland and distributed by MacGillivray Freeman Films.

America’s Musical Journey
America’s Musical Journey celebrates the unique diversity of cultures and creative risk-taking that characterize America, as told through the story of its music. Follow Grammy Award-nominated singer/songwriter Aloe Blacc as he traces the roots of America’s music and follows the footsteps of Louis Armstrong through the colorful locales where American music was born. Visiting cities such as New Orleans, Chicago, New York, Nashville, Memphis, Miami, and more, audiences will experience paddle-wheeling up the Mississippi Delta, flash mob dancing in Chicago, and skydiving with Elvis impersonators in scenes shot exclusively for the giant screen. Along the way, they’ll discover the unique collision of cultures that gave birth to America’s music, culminating in a one-of-a-kind blend of sound, culture, and innovation unlike anywhere else in the world. A MacGillivray Freeman film produced in association with Brand USA and presented by Expedia and Air Canada.

Volcanoes
Volcanoes—The Fires of Creation is a tale of science, culture, and thrilling adventure. Earth is a planet born of fire. For billions of years, volcanoes have helped create the world we know. From the continents to the air we breathe and even life itself, all have their origins in fire. These processes have created extraordinary ecosystems and wildlife habitats. With more than 500 active volcanoes, the Earth is bursting at the seams with these forces of mass construction. The story of volcanoes is the story of the planet’s creation, and the story of us. With explorer Carsten Peter, dodge boulders at the edge of an active volcano in Indonesia, descend to a lava lake in Vanuatu, and visit the incredible mineral deposit fields in Ethiopia. Travel across the globe to see the archeological ghost town of Pompeii and witness the devastating effects of the recent Kilauea eruption in Hawaii. Audiences will be on the edge of their seats as they discover molten worlds and exploding craters in this adrenaline-filled, immersive experience that only IMAX/giant screen films can provide.

Oceans: Our Blue Planet
Oceans: Our Blue Planet takes us on a global odyssey to discover the largest and least explored habitat on Earth. New ocean science and technology has allowed us to go further into the unknown than we ever thought possible. From the coastal shallows to deeper, more mysterious worlds, we reveal the untold stories of the oceans’ most astonishing creatures. Dolphins leap for joy through the waves as we begin our journey into the blue. Our first stop is the coral reefs, where we meet fascinating characters like the ingenious tusk fish that uses a tool to open its food. In the great forests of the sea, we find a cunning octopus who shields herself in an armory of shells to hide from predators. As we journey through our oceans, we share these extraordinary discoveries and uncover a spectacular world of life beneath the waves.

The Story of Earth
Born from dying stars, it was sculpted by violent collisions in space. Yet, in an epic journey, this hostile ball of molten rock transformed itself into a nurturing environment. From it emerged forms of life, none of which have been found anywhere else in the universe. That planet is not millions of light years away either. You are standing on it right now. It is Earth.

Turtle Odyssey
Sea turtles are some of Earth’s most ancient and majestic creatures. For more than 100 million years, they have traversed the seas, enduring mass extinctions and playing critical roles in maintaining food webs. But now they face a new threat—humans. It’s time we learned more about these remarkable reptiles. Academy Award winner and turtle conservation champion Russell Crowe narrates the captivating tale of Bunji, a green sea turtle. From the moment her fragile egg cracks below the warm sands of an Australian beach, we join Bunji as she travels through the Great Barrier Reef and thousands of miles into open ocean. After decades, she will migrate with mysterious precision back to the very same beach where she was born and lay the eggs that are the foundation for the next generation. With Bunji as our guide, we will meet an astonishing range of strange and compelling creatures and witness some really wild encounters. All have been filmed in stunning 3D, so you will feel truly immersed amongst massive manta rays, breaching whales, and vibrant clownfish. Sea turtles remind us just how interconnected we all are, and audiences will be moved to cherish these beautiful and vulnerable animals even more.

Hurricane
This is the true story of a 9,300-mile (15,000-kilometer) journey in the footsteps of one of the most devastating natural events on our planet: the Atlantic hurricane. Our protagonist is both shatteringly destructive and vital to life on Earth. A mere breeze at its conception, as it sweeps over the African Sahel it becomes a life-giving monsoon, before setting out across the Atlantic as a deepening depression. The hurricane is the film’s main character. The supporting cast: the men, women, plants, and animals that it encounters on its journey and affects in some way, for better or for worse. Serene and exquisitely beautiful from space, at ground level in the face of the screaming wind, Hurricane is nothing less than terrifying.

Earlier this week, the White House released its proposed budget for fiscal year (FY) 2021, which will begin on October 1, 2020. The President’s budget is more a statement of administration priorities than an actual fiscal plan, as it is Congress’ responsibility to actually pass a budget.  As with the several past budget requests, the […]