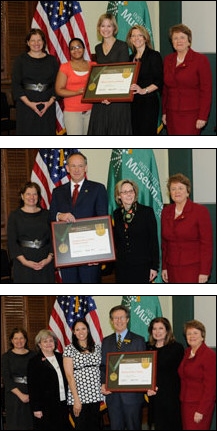 On February 23, 2010, Anne-Imelda M. Radice, the U.S. Institute of Museum and Library Services (IMLS) director, and Susan Sher, U.S. First Lady Michelle Obama’s chief of staff, presented the 2009 National Medal for Museum and Library Service, the nation’s highest honor for museums and libraries, at a Washington, D.C., ceremony. The National Medal is awarded each year to five museums and five libraries that have demonstrated a long-term commitment to public service through innovative programs and community partnerships. Three ASTC members were among the honorees—Children’s Museum of Pittsburgh, Pennsylvania; Museum of Science and Industry (MOSI), Tampa, Florida; and Cincinnati Museum Center (CMC), Ohio.The ceremony highlighted how the museums’ programs have benefited individual community members. Brittani Brown participated in the Children’s Museum of Pittsburgh’s YouthALIVE! after-school program from the sixth through eighth grades, became a museum volunteer in high school, and was later promoted to a paid position as a youth puppeteer in the YouthALIVE! Puppet Troupe. Faith Anne Brown is a graduate of CMC’s youth leadership program, where she facilitated interactive programs for families at CMC’s Duke Energy Children’s museum. She recently completed her undergraduate degree with honors in chemistry at Howard University. At age 14, Vivian McIlrath joined MOSI’s YES! Team, a leadership development/mentorship program for teens facing multiple risk factors, and her program scholarship stipend helped to financially support her family. She went on to gradauate from the University of South Florida and was the first scholarship recipient of the National Hispanic Scientist of the Year Award. Today, McIlrath heads the YES! Team program, helping to share with students the same opportunities she was once offered.

In addition to the National Medal and a $10,000 award, each Medal recipient will have the option of a three-day visit by StoryCorps, an independent, nonprofit, oral history project that records conversations with community members that can be shared through a free CD and are preserved at the Library of Congress.