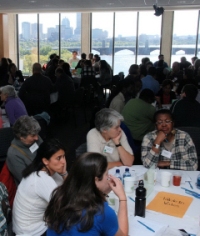 On September 26, the Museum of Science, Boston, was one of hundreds of sites in 40 countries that participated in the Danish Board of Technology’s World Wide Views on Global Warming (WWViews). Each site hosted a group of citizens who spent the day responding to questions about global warming and outlining what they expect global leaders to do about it at this year’s Conference of the Parties to the UN’s Framework on Climate Change (COP15).

To make sure that the results from WWViews reach both the broader public and decision-makers, the Museum of Science planned two follow-up events. The first brought participants back the day after WWViews to share their experience with the public alongside scientists and government officials who helped interpret the day’s results.

The second event will be a joint transatlantic conference with La Cité des Sciences et de l’Industrie in Paris, the only other science center to participate in WWViews. Science center staff will be joined by Intergovernmental Panel on Climate Change scientists and French and American policy experts, including the COP 15 negotiator for France and the Director of the US Climate Change Science Program Office.

The museums’ involvement in WWViews illustrates the central role science centers can play in addressing global issues. “There are a lot of people working in public engagement who have considered global engagement on this scale, but this is proof that it can happen,” said David Sittenfeld, project manager at the Museum of Science. “ASTC and the science center field have a part to play, creating the chance for results to reach more people and to have more power when presented to policy makers.”