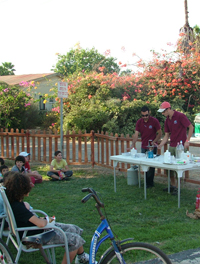 ASTC-member MadaTech—Israel National Museum of Science, Technology, and Space, located in Haifa, is working to help those affected by the fire that broke out in the nearby Carmel Forest on December 2. The fire raged for four days, killing more than 40 people, displacing 17,000 residents, and destroying 10,000 acres of forest.

Ronen Mir, MadaTech’s general director and CEO, writes, “MadaTech opened our doors free to families who were evacuated, and we sent our science vans to places where the evacuated were housed to entertain the kids. We also held a two-day camp for 120 kids of the police force.”

Several MadaTech employees and Board members were evacuated from their homes, but none lost their property in the fire.

Mir notes, “We are now operating as usual, though the green Carmel mountains around us are black.”

About the image: MadaTech staff members perform a demonstration for children who were evacuated from their homes due to the fire in the Carmel Forest. Photo courtesy MadaTech