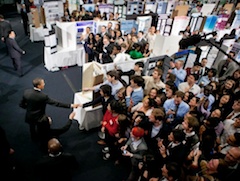 During a day trip to New York City on March 29, U.S. President Barack Obama made an unscheduled stop at the American Museum of Natural History to tour the New York Science and Engineering Fair—his third science fair visit in recent weeks. As he examined projects including a bamboo bicycle and an exhibit on human-robot speech interaction, Obama told students, “There’s going to be a great demand for people with the skills you’re developing.”

In addition to his science fair drop-ins, the president has hosted several events, including a White House science fair, Astronomy on the South Lawn, and a meeting with Intel Science Talent student finalists, to encourage young people to pursue careers in science, technology, engineering, and math (STEM). ASTC, through its network of local science centers and museums and its Youth Inspired Challenge, is committed to doing its part to meet the president’s goal of strengthening STEM education. To learn more about the Youth Inspired Challenge, visit www.youthinspiredchallenge.org.