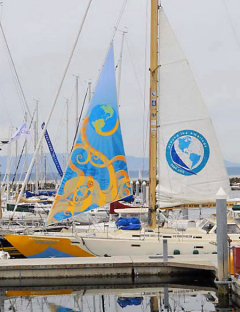 After three years of planning, Around the Americas, an ocean voyage organized by Pacific Science Center, Seattle, and Sailors for the Sea, is underway. On May 31, Ocean Watch, the project’s scientifically equipped sailboat, launched from Seattle to begin its 24,000-mile circumnavigation of the North and South American continents. During the 13-month journey, the boat will stop at 31 ports to draw attention to the changing condition of the oceans.

Pacific Science Center is staffing Ocean Watch with a teacher to lead outreach activities in each port and developing curricular materials on ocean health. Scientists also will be on board during various legs of the voyage. Planned research projects include the deployment of buoys in the Arctic to measure air pressure and sea surface temperatures, a survey of jellyfish populations along the route, and daily observations of cloud cover as part of the NASA Students’ Cloud Observations On-Line (S’COOL) project. People around the world can follow the expedition on the Around the Americas web site, which features daily crew reports, photographs, and a tracking program that updates the boat’s position every two hours.

About the image: Ocean Watch moored in Seattle before beginning its voyage. Photo courtesy Around the Americas