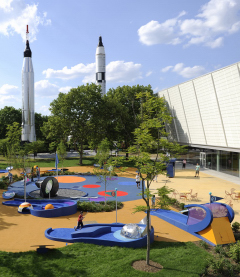 Summer has arrived in the northern hemisphere, and ASTC members are offering a wealth of warm-weather science activities. Many museums held summer soltice celebrations on June 21, including Carnegie Science Center, Pittsburgh, Pennsylvania, where visitors received free admission if they brought a snowball from this past winter to launch from a giant slingshot into the Ohio River. Science parks with water exhibits have reopened for the season at Heureka, Vantaa, Finland, and Montshire Museum of Science, Norwich, Vermont. And science camps are underway at many centers, including Oregon Museum of Science and Industry, Portland, which offers overnight camps throughout the northwest United States that invite both children and adults to explore coastal biology, astronomy, and geology.