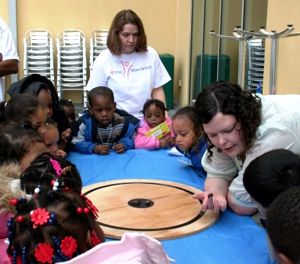 On April 21, the PNC Foundation announced Grow Up Great with Science, a new initiative to foster a foundation in science for preschoolers. The foundation has awarded grants to 14 mid-Atlantic science centers and nonprofit organizations, including 10 ASTC members. The grants will fund professional development for local preschool teachers and free science center visits for families with preschoolers. In addition, science center staff will travel to classrooms to help teachers create hands-on activities for their students.

The intiative was announced in celebration of the fifth anniversary of PNC Grow Up Great, a 10-year, $100 million investment in early childhood education. The PNC Foundation has pledged up to $6 million in grants over three years to fund the program and conduct an independent evaluation of its success. Second- and third-year funding is contingent upon science centers’ successful completion of the prior year’s project goals.