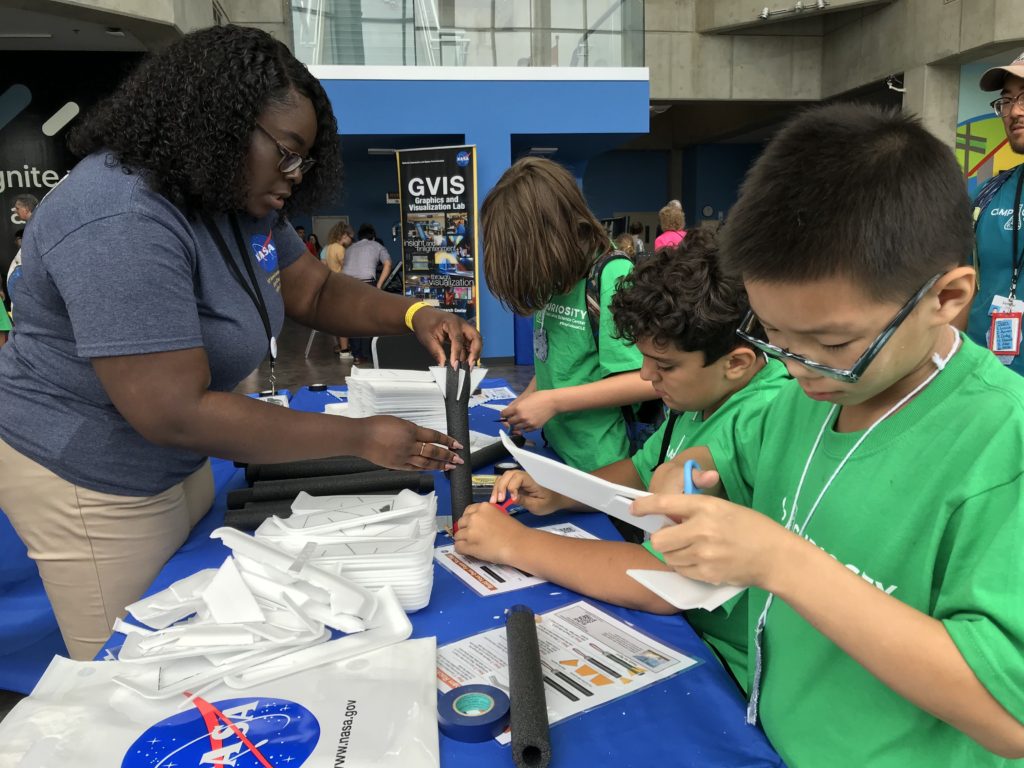 Visitors to the Great Lakes Science Center in Cleveland celebrated the 50th anniversary of the Apollo 11 mission with a weekend of space-themed programs and activities, including engineering and launching miniature rockets.

“That’s one small step for man, one giant leap for mankind.”

July 20, 2019, marked the 50th anniversary of the historic Apollo 11 moon landing and Neil Armstrong’s famous moonwalk. In 1969, this iconic moment in history gripped the attention of millions of people around the world who watched the events unfold live on their TV sets at home. Now, 50 years later, the historic mission to the moon is still just as captivating as it was in 1969, for both new generations and those who experienced it live.

Honoring the Apollo 11 mission and its impact on science and society, science centers and museums around the globe celebrated the 50th anniversary with themed activities, programs, and events. The worldwide celebrations featured everything from space-themed science activities—including rocket launches, model lunar rover races, and lunar landing simulations—interactive space exhibitions; riveting discussions with current and former astronauts; moon parties (and many a “moon pie”); and showings of the original footage of the Apollo 11 mission as it unfolded five decades ago.

Relive the Apollo 11 mission and check out a fun snapshot of the many ASTC-member celebrations below.

We raced our Lunar Rover models built for our #VirtualMoonshot! Vote for your candidate to send to the #Moon on our Instagram story! pic.twitter.com/ebvNHqLj1F

Our celebration of the moon landing is underway. Families are making stomp rockets and lunar landers and exploring Shuttle Blake. We’re open until 10 p.m. with $5 admission after 5 p.m. Come out to do telescope viewing and hands-on space activities. https://t.co/q3TxJlmaLC pic.twitter.com/SZZ5LEM1iq

It’s #MoonWalkWeekend! Celebrate #50Years since landing on the moon with fun-filled themed activities and the debut of #LANDER fulldome feature film (2 days only) to learn about Canadian contributions to the historic Apollo program. pic.twitter.com/g7PHVC44TN

TODAY! Join us for Moon Mania: The 50th Anniversary of #Apollo11! All weekend, we’re celebrating the historic day that humans walked on the #Moon, with new shows in the planetarium, astronaut activities, a space-approved food menu, and beyond. https://t.co/S45VkeR25A pic.twitter.com/WAgI6Do5U3

We kicked off our #Apollo11 anniversary celebrations last night with a fantastic edition of LIVE@Frost Science with @SenBillNelson. He shared his voyage to space as a crew member on the Space Shuttle Columbia and insights on the future of space exploration. #Apollo50th pic.twitter.com/0P7cLq2KIq

It’s #MoonDay! Head out to MPM to see NASA artifacts, do crafts and more to celebrate the iconic #Apollo50th https://t.co/6xp09N7yIV pic.twitter.com/mbhsXOFsIJ

We continued the #apollo50th celebrations today with a panel on U.S. space exploration in the Kirkpatrick Planetarium! The conversation was moderated by House Space and Aeronautics Subcommittee chairwoman @repkendrahorn and included @oklahomacareertech Director Dr. Marcie Mack, @universityofokla professor of Russian and Soviet Studies Dr. Melissa Stockdale, author of “Oklahomans and Space: Chronicles of the Amazing Contributions of Oklahomans in the Aerospace Industry” Bill Moore, and Executive Director of Oklahoma Advanced Technology Initiatives Division of Strategic Development for the @choctawnationok, James Grimsley. #apollo11anniversary #apollo50 #apolloat50 #invitecongress

Check out our new exhibit, “Apollo 50: Small Steps to a Giant Leap,” and celebrate the anniversary of the first Moon Landing from 11 am to 6 pm today! We’re following the Apollo 11 mission in real time in the Science Thearer, with touchdown at 1:18 pm PD… https://t.co/l0rfcso4V8 pic.twitter.com/iH5yCSjmz9

We’ve got plenty of space and cool air to offer our guests at Moon Bash! Come celebrate the Moon Landing with us until 6 pm! #apollo50th #apollo11 #moon pic.twitter.com/3O9ZwEdxct

It’s on! The Canada-wide discussion via webcast with ⁦@csa_asc⁩ astronauts Robert Thirsk in Toronto & David Saint-Jacques in Montreal has started. #apollo50 pic.twitter.com/Kuw7NP6ANx

NASA’s Col. Mark Vande Hei joins us today to share his own experience in space in honor of the 50th anniversary of the Apollo Moon landing! #apollo50th

It’s a beautiful day for a Rocket Launch! 🚀

Stop into Imagination Station to build your own rocket as part of #OneGiantLeap – celebrating the 50th Anniversary of Lunar Landing.

Feeling nostalgic about the 50th anniversary of the first lunar landing? Stop by the Discovery Center to see our very own moon rock. NASA loaned a lunar sample to the Anchorage Museum in 2009. It is 3.3 billion years old & was collected during the 1971 Apollo 15 mission. pic.twitter.com/JWiOoEkYJh

On this day in 1969, humans first walked on the Moon. We’re celebrating 50 years of the Moon landing with a week of events, including mini performances about the landing. There will even be the chance to touch a genuine Moon rock! #Moon50 More info: https://t.co/bfBxQ6bLCy

Today in the #STEMLab, join us to watch the #Apollo11 moon landing and learn more about the moon! Happy #Apollo50th to everyone!
👩‍🚀🚀🌝 pic.twitter.com/0yokTae6ed

So much is happening!
There is an anti-gravity room (aka bouncy castles)!
The Social Eatery will be open and there will be 8 #local breweries on-site!
Plus moon-themed everything!

Take a journey into outer space! Try your hand at building the perfect rocket ship in our S.P.A.C.E. Gallery and see what new heights you can reach. Or see a piece of the Moon close up in our Destination: Moon 3D Theatre. #space #yeg #moonrock #mytwose https://t.co/T6f0fKWDut pic.twitter.com/x3D50vPv6O