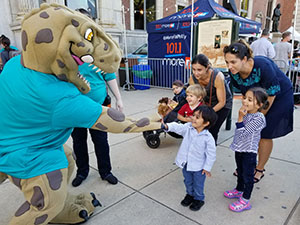 The Academy of Natural Sciences of Drexel University is known fondly in the Philadelphia region as “the dinosaur museum.” To some people that connotes “children’s museum,” and indeed the marketing in the last decade has been successful in attracting scads of families with young kids.

Some visiting parents tell us toting their toddler or preschooler to see Tyrannosaurus rex is the first time they’ve been back to the Academy since they were kids themselves. And that’s our challenge, as it is with many museums—how to expand our audience to attract more adults.

Time to try a new initiative.

A year ago, we mixed three main ingredients, stirred well, and created an appetizing recipe for expanding our audiences that we hope will get better with age as we enter Year Two. 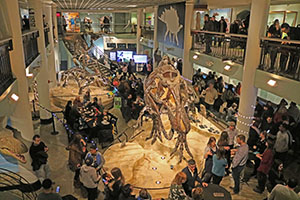 Dinos After Dark is now a monthly program when visitors can pay what they want to enter the museum, and the museum remains open until 8:00 p.m. A pop-up beer garden is set up outside until 10:00 p.m., or inside until 8:00 p.m., depending on weather.

“Dinos After Dark was an experiment from the beginning,” says Mary Bailey, interim head of public experience at the Academy of Natural Sciences. “We wanted to see if we could engage a wider audience by offering something outside normal business hours.”

“We found that the event attracts a wonderfully wide audience of Academy members and nonmembers, people from different socioeconomic backgrounds, families with kids, families with just adults, friend groups without kids, specialists, people who like natural science, and people just looking for something to do on a Friday night.” 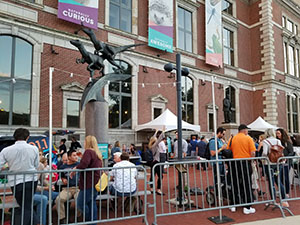 The first Dinos After Dark was held last year on January 26, 2018, and attracted a whopping 2,100 visitors, generating substantial revenue from pay-what-you-wish admission and beer garden sales.

“A third to a half of attendees came for the beer and stayed in the beer garden with their friends much of the evening,” Bailey recalls. “But we were surprised to see so many young professionals and other adults walking throughout the museum and really engaging with the exhibits and staff.”

“Interestingly, the families who came were excited to see they could have a beer at a family event, like a sanctioned naughtiness.”

Since that initial event, attendance has tapered off to about half the original number—still a substantial amount of people who most likely would not have visited during regular museum hours for one reason or another. Month-to-month attendance has varied based on a variety of factors, including media mentions and competition from everything else going on in America’s sixth largest city. 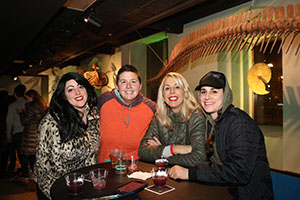 Event organizers learned that adding special programming to the evenings did not make a substantial difference in the number of attendees. Once there was a pop-up ballet performance; other times there were live animal shows and theater skits. But cross-promoting on social media with the guest partner organizations, plus mentions in the press and among bloggers, helped spread the word to wider audiences.

Dinos After Dark may not be a profit generator yet, but the program is only a year old, and it takes time to build momentum. The first measure of success is the exceptional community engagement, word-of-mouth recommendations, and general good will the Academy has received by opening its doors after regular hours and with the pay-as-you-wish admission.

We’re looking forward to an exciting Year Two ahead.