On Monday, August 21, all of North America will experience a solar eclipse, and anyone in the path of totality can see the moon completely cover the sun, a dramatic experience some have called life-changing. The path arcs from Oregon coast to the shores of South Carolina, passing through many communities served by ASTC members—where some exciting public engagement activities are scheduled.

Even outside of this path, you can still witness a rare and memorable partial solar eclipse where the moon covers part of the sun’s disk, and—as you’d expect—ASTC members in these areas are also using the event as a springboard for informal science learning experiences.

The (U.S.) National Aeronautics and Space Administration (NASA) created a website to help provide resources for this event, eclipse2017.nasa.gov, and it includes background on the science of eclipses, viewing safety, public engagement, citizen science opportunities, education resources, events around the country, and more.

You can also find a wealth of information about the astronomical event at www.eclipse2017.org, including some very detailed maps, and more information and eye safety resources from the American Astronomical Society at eclipse.aas.org.

The Eclipse Megamovie Mobile app from the Eclipse Megamovie Project will empower citizen scientists to capture photos of the eclipse in North America. You can download it for Android or iOS devices and share pictures with project scientists. They are creating a massive dataset of eclipse observations from around the country that scientists can use for years to come.

See below for an ever-growing list of additional resources.

The following are compiled from information shared with ASTC. If you have news to share, please contact ASTC’s Todd Happer or call the ASTC office at (202) 783-7200.

Eclipsing with ASTC-Member Institutions along the Path

In Newport, on the Pacific Ocean coast, Oregon State University’s Hatfield Marine Science Visitor Center will offer presentations on the course of the eclipse in its auditorium on the days leading up to the event (the center is closed on Mondays): “The August 21st Total Solar Eclipse, from the Partial Phases through the Darkness of Totality and Back Again.”
Details: Marlene Jasperson, (541) 867-0156 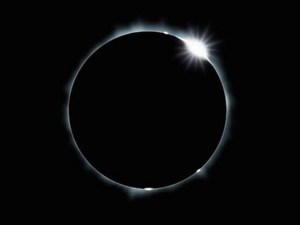 The Oregon Museum of Science and Industry (OMSI), which is just outside the path of totality in Portland, planned its eclipse event to be at the center of the action— an hour’s drive south at the Oregon State Fairgrounds in Salem. The Solar Eclipse Viewing Party will feature will include science talks, activities with a dozen astronomy-related community groups, entertainment, and more. Don’t try to get a ticket now; the event sold out early, and the waiting list is full!
Details: John Farmer, (503) 797-4000

At the Lander Children’s Museum in Lander, closed on Mondays, they’ll be hosting an event called “Total Eclipse at the Museum” on Saturday, August 19, with a variety of hands-on learning experiences and safety information to help families prepare for the eclipse. It is a culmination of a summer of science at the institution, with space-oriented exhibits and summer classes focused on the eclipse as well.
Details: Brian Reisig, (307) 332-1341 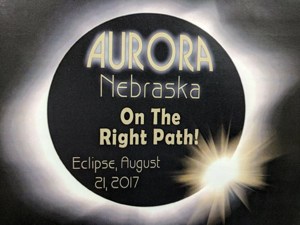 The Edgerton Explorit Center in Aurora is part of a community-wide initiative welcoming thousands of guests to the city for viewing this once-in-a-lifetime event, and has been active in distributing viewing glasses—with the entire supply already gone!
Details: Dan Glomski, (402) 694-4032

Science City at Union Station in Kansas City will celebrate the event in a Solar Eclipse Watch Party with eclipse-themed planetarium shows, Science on a Sphere presentations focused on eclipse science, special eclipse activities in the Maker Studio, solar telescope and projections in the expansive, new Haverty Family Yards outdoor space, free solar glasses while they last, an event with a local television meteorologist, and more.
Details: Jeff Rosenblatt, (816) 460-2020

Leading up to the eclipse, the Saint Louis Science Center has been offering activities all summer, explore how the sun, Earth, and moon behave to cause night and day; the reasons for the seasons; and how celestial bodies can align to create an eclipse. A special installment of the Star Dates series for adults in the James S. McDonnell Planetarium on Friday, August 19, will include a special showing under the stars of Indiana Jones and the Last Crusade as well as opportunities to find out more about the upcoming eclipse. An Eclipse Festival during the big event on Monday, August 21, will feature fun activities for all ages and educators describing the science of the eclipse outside as it happens live.
Details: Christian Greer, (314) 289-4400 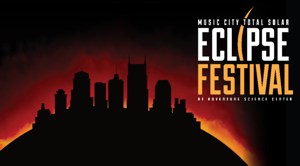 Providing locals and visitors a science-rich place to experience and event that won’t happen in Murfreesboro for another 500 years, the Discovery Center at Murfree Spring will offer special activities throughout the day, including viewing stations, educational activities, and more.
Details: Katie Woodward, (615) 890-2300

Monday tickets are already sold out for the Eclipse Extravaganza at the Roper Mountain Science Center in Greenville, but pre-eclipse programs are available throughout the preceding weekend. The event includes special shows about the eclipse in the newly renovated T.C. Hooper Planetarium, solar viewing in the Daniel Observatory, programs on how to view the eclipse safely, pop-up eclipse activity stations throughout the exhibit galleries, make-and-take activities, visits with NASA Solar System Ambassadors, citizen science projects and design challenges, and more. The center is also raising funds through a raffle for a chance to be the only person who’ll get to see the rare event through the historic 6″ Mogey refracting telescope in the Daniel Observatory.
Details: Michael Weeks, (864) 355-8900

Visitors to Edventure in Columbia can mingle with astronaut characters, find out about the science behind the eclipse, and party on the patio during the Eclipse Day event, and the first 821 visitors will receive $1 admissions and free solar glasses while supplies last. They can enjoy an environment filled with music, games, and activities such as Pin Hole Camera and Prisms, Galaxy Pinwheels, Eclipse Chalk Art, Face Painting, Create A Solar System Mobile, Design an Eclipse Model, Phases of the Moon Cookies, Marshmallow Constellation Art, and much more.
Details: Laura Baker, (803) 779-3100

The Exploratorium in San Francisco is opening early at 9:00 a.m. on Eclipse Monday, where viewing telescopes and question-answering astronomers will anchor the institution’s Total Solar Eclipse activities in the United States and around the world. Exploratorium livestream teams will broadcast from the path of totality at sites in Oregon and Wyoming into the exhibit galleries, with an English-language program, a Spanish-language program, a feed with sonification provided by the Kronos Quartet, and a quiet, telescope-only feed. If you can’t make it to San Francisco for the event, you can catch the experience on the Exploratorium’s website or watch any of the streams in your hand with the free Total Solar Eclipse app.
Details: Martin Rock, (415) 528-4444

In Alamogordo, where totality will be about 72%, the New Mexico Museum of Space History is staging the Un-Eclipse RV Rally over the four days of Friday–Monday, August 18–21. The event is open to anyone with a recreational vehicle, and the museum is allowing dry camping onsite at its spacecraft-dotted campus in the mountain foothills. The festival will include building and launching model rockets, wine tastings, planetarium shows, outdoor films, a star party, tours to local attractions such as the White Sands National Monument, nightly stargazing under the dark Alamogordo sky, and a live NASA feed of the eclipse as it happens.
Details: Cathy Harper, (575) 437-2840

During the 2017 Eclipse across America events at the Discover Center Museum in Rockford, visitors can get ready on Sunday, August 20, with a special planetarium show, activities that explore sun-moon-earth relationships, the chance to make tools for safely viewing the eclipse, and more. On the Monday of the eclipse, where the moon will cover 85–90% of the sun, the same programs will be offered, along with an outdoor viewing of the event, weather permitting.
Details: Ann Marie Walker, (815) 963-6769

In Fort Wayne, Science Central is closed on Mondays, but is combining eclipse-preparation programs with its Special Abilities Days series on Sunday, August 13. Visitors can get free eclipse viewing glasses (while supplies last) and take part in hands-on activities and demonstrations that help explain safety and solar science. The learning environment is modified during Special Abilities Days with additional staff, science demonstrations that feature extra tactile stimulation, access to listening devices, and reduced light and sound in key areas. Although the center’s solar glasses sold out, people can still get them with the purchase of a new membership, or the early renewal of an existing membership—two pairs for an Entry Level ($85) membership or four pairs for a Deluxe Level membership ($125).
Details: Martin Fisher, (260) 424-2400 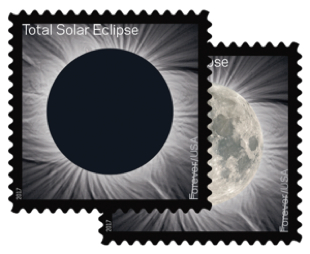 The Orlando Science Center was chosen as one of several locations across the nation for a July 13 debut of the new Total Eclipse of the Sun postage stamp from the U.S. Postal Service. The stamp uses thermochromic ink, employing the body heat of a finger to reveal an underlying image of the full moon. The picture reverts to the eclipse once it cools. The reverse side of the stamp sheet shows the eclipse’s path across the United States. And that’s just a warm up for the science center, which will host a viewing celebration on August 21, complete with opportunities for visitors to see the event with safety glasses and solar telescope filters, make phone filters to capture photos with mobile devices, enjoy solar-themed crafts and art activities, calculate eclipse distances and temperatures, experience solar eclipse demonstrations, and more. OSC staff will also put on other viewing events around town, featuring distribution of solar viewing glasses, demonstrations, models, and hands-on activities. All the viewing events are mad possible with support from local nonprofits and businesses.
Details: Jeff Stanford, (407) 514-2000

People can view the partial eclipse in Pittsburgh at the Carnegie Science Center, where special solar observation equipment, including a solar telescope, will be available. During the event, the center will have eclipse-themed science demonstrations and crafts. Live video feeds of the total eclipse from locations in the path of totality, will be beamed into the Science Stage, where astronomical specialists and experts will help interpret the event. Also, the Buhl Planetarium will feature special shows, demonstrations, and live feeds with commentary.
Details: Connie George, (585) 237-3400

In Rochester, where 70% of the sun will be covered by the moon, the Solar Eclipse Day at the Rochester Museum & Science Center will include free viewing opportunities at the Strasenburgh Planetarium, aided by volunteer guides, including physicists from the University of Rochester and amateur astronomers from the Astronomy Section of the Rochester Academy of Science. There will also be showings of Eclipses 2017 and 2024, a star show that explores the mechanics of eclipses and previews the upcoming event when Rochester will be in the path of totality. The day will cap a four day run of special family programs related to the eclipse, offered in the Exploring Science: Earth & Space exhibition from Friday, August 18, through Monday, August 21. Visitors can make clouds, imagine what extraterrestrial life might be like, investigate gravity and much more while also discovering some of the ongoing research happening at NASA in the fields of heliophysics, earth science, planetary science, and astrophysics.
Details: Amanda Bayer, (585) 271-4320 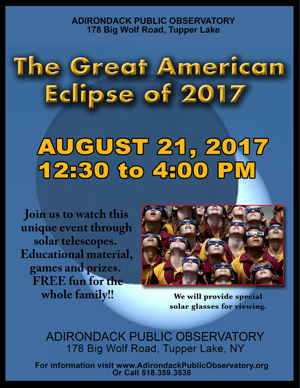 In the remote wilderness of the Adirondack Mountains in upstate New York, two ASTC members are coordinating eclipse events in the town of Tupper Lake. At the Adirondack Public Observatory, the Great American Eclipse of 2017 will feature viewings through solar telescopes, aided by professional and amateur astronomers; standard telescopes and binoculars outfitted with solar filters; and, or course, safety viewing glasses for everyone. Along with games and prizes, the sun party will also feature astronomy-related activities from the eclipse kits and resources available from the Astronomical Society of the Pacific. Down the road at the Wild Center, the SunFest event will feature special programs facilitated by naturalists who can help answer questions about the eclipse and the role of the sun in astronomical and Earth systems.
Details: Adirondack Public Observatory, Carol Levy, (518) 359-3538; Wild Center, Stanzi McGlynn, (518) 359-7800 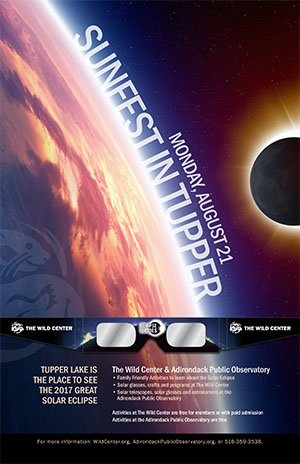