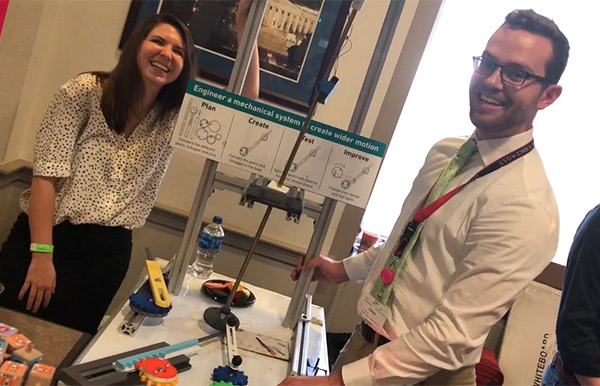 Engineering and coding, with the Museum of Science, Boston 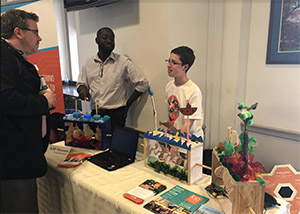 Machines that tell science stories, with the KID Museum

by Lesley Markham and Carlin Hsueh

The Capitol Hill Maker Faire has become a yearly fixture for the maker community to showcase the best of making for the U.S. Congress during the National Week of Making.

It was hosted by the Nation of Makers, along with the Institute of Museum and Library Services (IMLS) and the Congressional Maker Caucus, with support from sponsors Chevron, Consumer Technology Association, and makezine.com.

This year the event was held on the evening of June 12 in the Rayburn House Office Building on Capitol Hill, with hands-on activities presented by staff from five ASTC members, and was preceded by a daylong series of panel sessions providing enlightening, relevant, and leading-edge information to an engaged and enthusiastic audience. 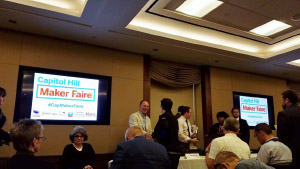 At the pre-Faire sessions. Photo by Carlin Hsueh

The panel sessions were opened by Maker Caucus Co-chair Representative Mark Takano of California and IMLS Director Kathryn Matthew. Describing the importance of museums and libraries in the maker ecosystem, Matthew emphasized the IMLS strategic commitment to community-based learning, problem solving, and creativity.

The panels covered a range of Maker issues including rethinking design of curriculum, lifelong learning, the role of the Federal government, fostering entrepreneurship, and leveraging the power of the maker movement. 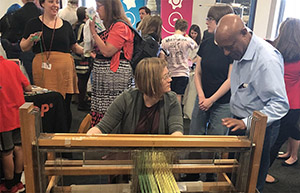 Weaving on a card loom, with the Children’s Museum of Pittsburgh

ASTC-member panelists included Sam Dean from the Scott Family Amazeum in Bentonville, Arkansas; Elvin Peprah from the KID Museum in Bethesda, Maryland; and David Wells from the New York Hall of Science in Queens.

Key takeaways from the discussions include the need to share resources; partner with schools, industry, and community organizations for impact; and support the advocacy efforts of the maker movement. Science centers and museums were encouraged to form strong relationships with schools through the provision of field trips, afterschool clubs, camps, and teacher professional development. 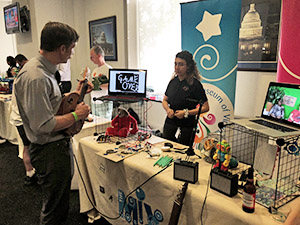 Electric guitar and video-game controlled by foot, with the Science Museum of Virginia

Representatives of NASA, the U.S. Marine Corps, and the U.S. Patent and Trademark Office talked about their role in making to improve their own scientists’ creativity and design as well as their making activities with children and youth.

Founders from two maker spaces shared how they are improving their support for budding makers and tinkerers to pursue economic stability by starting apprenticeship programs with local companies and the maker space. While they spoke about the opportunities maker spaces can provide their communities, they also admitted that there was still work to be done in making the spaces available to more diverse audiences.

“My favorite part of the Maker Faire was the ‘Federal Government and Making’ panel,” said Devyn Curley, Engineering Education Associate at the Museum of Science, Boston. “It was incredible to hear about all of the different ways the government was leveraging the maker mentality to improve the capabilities of their staff, and more-over how they are trying to expose more people in the United State to making.”

“That panel highlighted an aspect of the maker movement that has been on my mind, and that’s intellectual property. As maker space popularity increases, more and more incredible projects will be invented and fabricated in drop-in and membership-based spaces alike. This challenge was also mentioned in the ‘Concept to Scale: Fostering Entrepreneurship and Workforce Development through Making’ panel, where they discussed it as a challenge of starting up a space as a for-profit. I think the next big-picture step the maker movement needs to make is better understanding how to handle intellectual property in its spaces, and not just communicating that to makers, but providing them resources to navigate it themselves.” 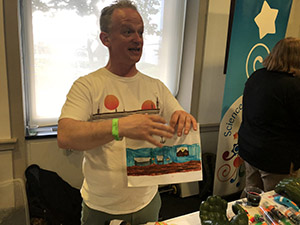 Following these informative sessions, the Maker Faire featured dozens of organizations sharing a cornucopia of making and tinkering activities spread out across the several rooms in the Rayburn Building, including experiences presented by five ASTC members: Children’s Museum of Pittsburgh, KID Museum; Museum of Science (Boston), New York Hall of Science, and Science Museum of Virginia (Richmond).

Click on some of the links above or photos to discover more about the activities that science centers and museums brought to the Capitol Hill Maker Faire. 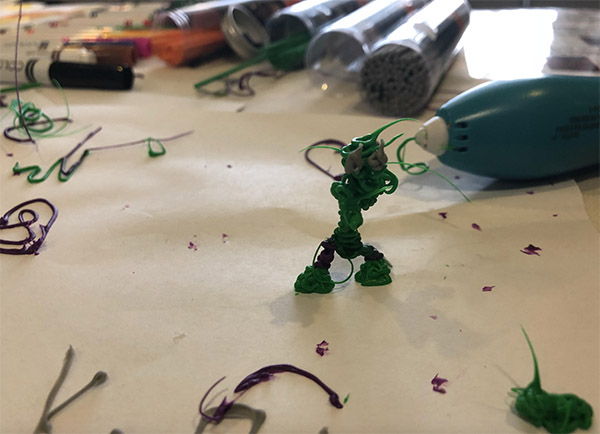 3D doodle pens, with the New York Hall of Science