The National Museum of Mathematics (MoMath) is the only museum in the United States focused solely on math. Its mission is to change public perceptions of mathematics by providing engaging, hands-on, exploratory experiences for visitors of all ages. 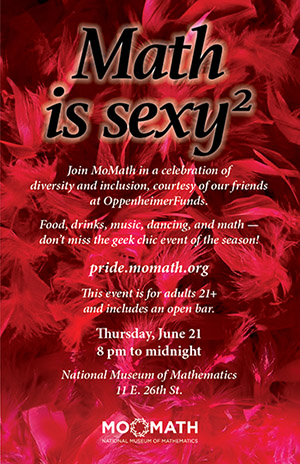 A common misperception is that MoMath is a children’s museum, and it has long been an audience development goal for the museum to further develop its adult audience. Additionally, like many other science centers, MoMath strives to show that math and science are cool. And the Museum is committed to reaching diverse audiences.

For MoMath, one of the greatest challenges is getting people to walk through the front door. Math is famously disliked and feared, and those who had less than positive experiences in their youth don’t think they would enjoy a museum centered on math. Yet those very people are an important part of the museum’s target audience. And experience has shown that if we can encourage people to take that first step through the front door, we can successfully change their views about math.

The Museum is often described as colorful, creative, and fun—these are not words that are typically associated with math. There are few numbers and no chalkboards in MoMath . . . just a world of exploration and discovery through hands-on, engaging exhibit experiences. It’s not uncommon to hear the words, “That’s so cool!” reverberating throughout its space.

MoMath is located in the heart of midtown Manhattan, and in June New York City becomes a hub of activity for Pride, a series of events celebrating sexual diversity and gender variance. The Pride March, which has become an annual civil rights demonstration, passes within steps of the museum, with its grandstand located just one block away, right in MoMath’s own front yard.

So it seemed like a natural fit to create an event that would celebrate diversity and inclusion during this special month, while also helping the Museum reach new adult audiences. The Museum was delighted when OppenheimerFunds stepped in to sponsor the event.

Part of the strategy in attracting people to this event was to shatter expectations about what math is and about the types of people who enjoy math. Starting with the name of the event, “Math is Sexy,” the Museum tried to break away from stereotypical descriptions of math-focused events. The graphic is adult-oriented, moving away from MoMath’s standard bright, primary color palette in favor of a more mature-seeming red and black image. The inclusion of DJs well-known in the community, the hiring of go-go dancers, and the marketing of the event as an adults-only, “geek chic” event, all contributed to the museum’s efforts. 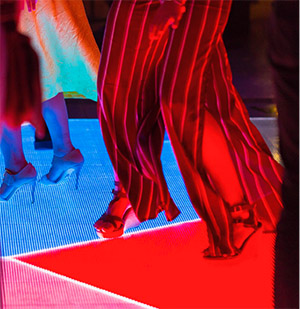 The 2018 event will be the Museum’s fourth annual celebration of Pride. MoMath’s Math Square exhibit has proved to be especially engaging during this event, with colors changing underfoot as dancers move to the music. It’s a mathematical program that’s creating the dynamic lighting effects, but to visitors, it’s just “the hottest dance floor in Manhattan.”

Last year, we were delighted to have a math professor from a well-known local university, decked out in a sequined top and a shiny suit, showing his dance moves on the Square. We look forward to creating more opportunities for math to intersect with diverse audiences this year.

All are encouraged to attend Math Is Sexy on Thursday, June 21, from 8:00 p.m. to midnight: pride.momath.org.