Volcanic activity around the Kilauea volcano on the Big Island of Hawaii has been an ongoing fact of life for residents since 1983, but on May 3 magma started spouting and flowing, forcing some people to evacuate and filling news media with dramatic images of the Earth’s geology in action. 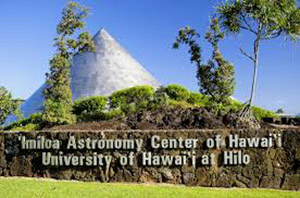 The ʻImiloa Astronomy Center is an ASTC member located about 25 miles (40 kilometers) from the affected area in the town of Hilo. ‘Imiloa means “to seek far” and is the Hawaiian word for both explore and explorer. Through a Hawaii lens, it explores our place in the genealogy of the universe and continually seeks, learns, and adapts to our ever-evolving environment that inspires discovery and innovation.

Ka’iu Kimura, ‘Imiloa’s Executive Director, shares a little about what life is like currently at the institution:

Mahalo NUI loa for your email! ʻImiloa is positioned quite far away from the volcanic activity. We have experienced the recent earthquakes, but no damage to our facility or programs. If anything, students that were here on field trip commented on how ʻImiloa “brings science to life” in the aftermath of the shakes :).

What we are feeling however are the impacts this is having on family, friends, and visitors to the center who are amongst the affected areas. We’ve also experienced several cancellations for groups coming from other islands. We just want to confirm with everyone that ʻImiloa is in a safe area, and we are a great place to come and learn about the volcano :).

Thank you so much for your support and concern for our wellbeing. That truly means a lot to us here!

Each of the eight islands in the Hawaiian archipelago is the top of a huge—and mostly underwater—mountain created by lava coming out of the same place in the Earth’s mantle (the “hot spot”). As the Pacific tectonic plate moves, each mountain slowly moves away from the hot spot (very slowly, like 32 miles, or 51 kilometers, every million years) and a new mountain starts to form over the stationary hot spot.

The hot-spot theory of the islands’ formation was proposed in 1963 by J. Tuzo Wilson, a Canadian geophysicist and geologist who went on to become Director General of the Ontario Science Centre from 1974 to 1985. Among many other connections to the global science-center community, ʻImiloa is part of the world’s “largest science exhibition,” hosting an Alpha Centauri obelisk on its campus that is part of the scale-model solar system at the Sciencenter in Ithaca, New York—the Sagan Planet Walk about 4,700 miles (7,600 kilometers) away.