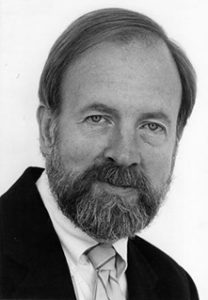 E. Verner Johnson—an internationally recognized museum architect and founder of E. Verner Johnson & Associates—died on February 24, 2017, at the age of 79. Johnson worked on architectural design and comprehensive master planning for more than 200 museum projects around the world, including for ASTC members such as the Cincinnati Museum Center at Union Station; the MIT Museum, Cambridge, Massachusetts; the Museum of Science, Boston; the Museum of Science and Industry, Chicago; and the Saint Louis Science Center, Missouri. He pioneered many design elements that are now commonly seen in museums, including open, flexible exhibit areas, and central, multi-level exhibit orientation spaces.

ASTC is honored to share this tribute to Johnson by his friend Dennis M. Wint, teaching professor of Museum Leadership, Drexel University, Philadelphia, and former president and CEO of the Franklin Institute in Philadelphia and the Saint Louis Science Center in Missouri.

There was a time when U.S. museums were stately, formal buildings reminiscent of the museum architecture of Europe. During that era, a new breed of architect emerged. Some designed imaginative buildings but had limited understanding or experience of how museums actually work. Others knew museums to their core and designed buildings to serve their collections, interpretative programs, and the people who would visit them. E. Verner Johnson may have known more about museums and how they work than any other museum architect in the world. Verner designed more than 200 museums in the United States and internationally. He had museum blood running through his veins.

Verner used a mission-driven model for museum development, working through each and every design phase. It was a model that I used as the chief executive of several museums and again when teaching graduate students in a museum leadership program. If one follows the model, the museum has a far greater chance of being successful and avoiding the pitfalls all too common among new and expanded museums.

When I first met Verner, I was president and CEO of the Saint Louis Science Center in Missouri, and we were planning a new building. It was a complicated project, merging the McDonald Planetarium in Forest Park with a new building, 1,200 feet (366 meters) away, on the other side of Interstate 40, with its eight lanes of traffic and a service road.

The architectural committee selected three firms to interview on the same day. I remember the interview process to this day. One of the firms, highly recommended with extensive experience in museums, brought six members of its staff. They had an elaborate display of illustrations and a slide show of their work. It was quite a production.

Verner represented the last of the three firms to be interviewed. In contrast, Verner walked in alone, with no support staff, and sat on a single chair before the selection committee, all of whom were seated behind an imposing table. He did not have illustrations on poster boards, but simply talked about museums, their roles, and why the mission of a museum and its architecture play a central part in the visitor experience.

Phase two of the selection process was to interview the architects in their respective offices, to get a sense of the working style of the firm, and to meet the project team. One firm had a large staff in an expensive neighborhood. We thought about having to pay their overhead costs. In contrast, Verner’s office was purposeful and functional. When we asked to meet the team, Verner said he would be the team leader—and he did take the lead through every phase of the project.

The design of the Saint Louis Science Center’s new building and renovation of the McDonald Planetarium was an immediate success, with 1.3 million visitors in the first year. The project was completed on time and on budget.

I admired Verner for his thoughtful understanding of what a museum represents, and the elements needed to make it successful, and for his close relationship with his staff and his clients. Verner and I became close and trusted friends.

Verner was a keen observer who had a passion for museums and their role in bringing art, science, and history to everyone. He designed remarkable buildings that were not only architecturally distinctive but also supremely functional in achieving the mission. His talent, insight, and contributions to the advancement of museums will be greatly missed.