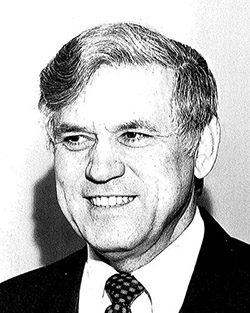 ASTC is saddened by the loss of Vic Danilov, a founding member of ASTC in 1973. Below this inadequate memorial are recollections from some of his colleagues, Jim Backstrom and David Ucko.

Victor J. Danilov, who passed away in July at age 93, dedicated much of his life to the science museum field, perhaps most significantly as the Director and President of Chicago’s Museum of Science and Industry (MSI) from 1972 to 1987.

He started his career as a journalist, then became a university educator, science magazine editor, museum director and president, and author (16 of his 28 books were about museums).

Under his leadership, the Museum of Science and Industry opened its space center and theater; major traveling exhibits; hands-on and children’s exhibits; a popular science lecture series; building classes; the annual Columbian Ball; and more.

He was appointed in 1974 by Chicago mayor Richard M. Daley to be chairman of the city’s newly created Chicago Council of Fine Arts, where he served for eight years under three other mayors.

Vic Danilov played an important role in the founding and early years of ASTC. Vic was methodical, organized and possessed quiet, but firm gravitas. He took meticulous notes and served as a sort of “flywheel” not letting matters slow down and stagnate, or even worse race out of control.

These attributes would be valuable in any enterprise, but they were critical in the sometimes messy and chaotic founding of ASTC. ASTC was founded by a group of enthusiastic, energetic, civic boosters, snake-oil salesmen, and amateur science fanboys. They were used to getting things done and making things happen with an almost evangelical fervor. There were any number of times when Vic was the only adult in the room!

Vic is an unsung hero who advanced the science center field and transformed his own institution. One of the founders of ASTC, he was a great advocate for the emerging science center field, helping get AAM to broaden its definition of “ museum” to include those without collections of artifacts. His 1982 book Science and Technology Centers, published by MIT Press, both served as a guide and established credibility.

He gave me my start in 1979, in response to a white paper by the Center for Science in the Public Interest that was critical of science museums as trade shows. I had just received tenure as a chemistry professor at Antioch, but the college went bankrupt, so I approached a few science museums, including MSI. Vic hired me initially as in-house scientist for exhibit content, which up to then had been developed by designers working for exhibit sponsors, based on the model for world’s fairs. We gradually shifted control to the museum, and produced such permanent exhibits as Technology: Chance or Choice? and Everyday Chemistry, as well as traveling exhibits such as My Daughter, the Scientist and Black Achievers in Science. I learned a lot from Vic during my seven years working with him, and will always be grateful for his guidance and support.