Chad Hunter, Director of The Rangos Giant Cinema, and Tamra Birchfield, Director of Special Events, decided to use this venue to provide a one-of-a-kind event.

On Saturday, May 19, guests will witness the Royal Wedding of Prince Henry of Wales and Meghan Markle at The Rangos Giant Cinema and be dazzled with royal family-inspired activities on the GIANT screen. 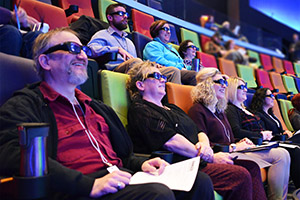 “The best collaborations we have are when we borrow ideas from each other so we’re not building from scratch,” said Birchfield. “Chad knows event cinema, and I know weddings. We relied on each other to bring our best ideas to the table to create a really awesome event.”

Birchfield and Hunter wanted to capitalize on the intense public interest in the royal wedding and differentiate the science center’s offerings from other watch parties in the area. Enter a 70-foot GIANT screen and cue the royal festivities!

Guests will have the chance to snap a photo with a cardboard cut-out of Prince Harry in a photo booth curated by Old Souls Vintage Rentals, indulge in an array of delicacies at a British-inspired “Pittsburgh Cookie Table,” sip on a cup of tea or bubbly at a mimosa bar, walk a royal red carpet with a Queen’s Guard, and make royal crowns.

The next question: “How do we get people excited about the Royal Wedding?”

Ticket sales went live on March 27, and the event sold out by April 30.

Due to the success of ticket sales and the interest of hosting this type of event, Hunter is considering future opportunities with live streaming on the big screen.

“Given the overall response, we definitely will look for future opportunities to do similar events,” Hunter concluded. “We’ve been looking at doing an Oscar event for some time. I’d love to also stream the International Video Game Championship, which reaches a completely different demographic than the Royal Wedding.”