Wild Music: Making the Most of Sound in an Exhibition 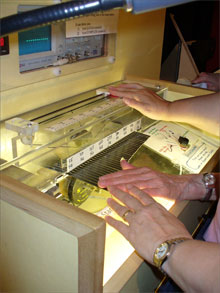 Sound in an exhibition? Most of the time, exhibition planners think of sound as something to be dampened, controlled, or contained. The very term “sound bleed” suggests exhibits battling for attention in an atmosphere of cacophony.

In planning Wild Music: Sounds & Songs of Life, the exhibition team—an unusual partnership among ASTC, the Science Museum of Minnesota (SMM), and the Music Research Institute at the University of North Carolina at Greensboro—decided to approach sound from an alternative perspective. We would treat it as an element to be tuned and composed, as well as an opportunity to enrich the experience for visitors who are blind or have low vision. Funding from the National Science Foundation, Harman International, and NEC Foundation of America ensured that the team was well positioned for this task.

We also were encouraged by what we were learning from our science advisors who study natural sounds as “soundscapes” (the acoustical equivalents of biomes), not just birdsong extracted from its context or a frog’s call minus its chorusing kin. Why not regard the exhibition in a similar spirit, with an overall and positive approach to acoustics paralleling traditional approaches to visual and spatial design?

Of the many people who provided advice and expertise to guide us on this path, two were especially important in our experiments with sound: Walter Waranka, an access advisor we invited to serve on the exhibition planning team, and Philip Blackburn, the musician who ultimately composed the exhibition’s overall soundscape.

An employment consultant and president of the Minnesota chapter of the American Council of the Blind, Wally Waranka had participated in an ASTC Accessible Museum Practices workshop in 2002. His regular attendance at Wild Music planning sessions helped maintain a focus on the experiences of people with disabilities.

Waranka could see the potential of the subject for people who are blind, as he is. Whale song, bird and insect calls, human music, the physics of sound—all are part of the study of the biological origins of music. There would be plenty to listen to. But assuming we could achieve high-quality sound, how could we ensure that the sounds would make sense to those who can’t read signs? And what experiences could be meaningful for people who are deaf or hard of hearing?

With Waranka’s advice, the developers devised an array of strategies for
interpreting sounds. These included
• Braille and acoustic labels. Standardized locations make these easy to locate.
• Tactile relief models. In one exhibit, for example, whale models are associated with buttons that activate different species’ songs.
• Tactile diagrams. In an exhibit about animal vocalization, visitors can select a tactile sonogram of a bird, mammal, or insect song and insert it into a slot, activating an audio recording. In an exhibit about the human voice (see above), tactile diagrams illustrate the shapes of anatomical airways and working mechanical analogs.
• Experiences of sound as vibration. A spectrum analyzer that works through vibrating metal reeds allows visitors to both feel and see that single sounds are often composed of several frequencies. In the exhibition’s small theater, “bass shaker” speakers bolted under the seats let visitors feel low-frequency parts of the soundtrack, while limiting the spread of these hard-to-contain sounds into the rest of the exhibit space.
• Visual representations of sound. In a working model of a larynx, a fan blows low-pressure air through rubber flaps. By pulling on a control knob, visitors can stretch the flaps and bring them together, producing a sound that varies in pitch with the tension applied. Strobe LEDs help visitors see how vibrations make the sounds they hear—or to see sounds they can’t hear.

After constructing a series of prototypes with Waranka’s advice, we tested them with other consultants who had developed exhibits with people who are deaf and hard of hearing. We also tested prototypes during a session focused entirely on accessible design. This was attended by members of several Twin Cities groups that represent people who have personal and professional experience with disabilities.

In addition to making individual sound experiences intelligible to a wider range of users, we were committed to creating an overall sound environment that was meaningful and harmonious. With 32 interactive exhibits in a 4,000-square foot space, this required a variety of sound-containment strategies.

From among the more familiar, we adapted several that were best suited to the exhibition’s intent:
• Headphones. Although headphones have drawbacks, our musical consultants persuaded us that there was no way to achieve enough high-quality sound experiences without them. We were encouraged by the example of Seattle’s Experience Music Project, which makes extensive use of headphones. We chose lightweight AKG headphones and, to counter the potentially isolating effect, provided them for the most part in pairs.
• Near-field speakers. We mounted high-quality speakers at about ear height for an adult seated on a stool, and provided start buttons and volume controls to reduce unnecessary sounds when an exhibit is not in use.
• Enclosures. We constructed three types of enclosures: a professional music practice room; open, roofless carrels with nonparallel, insulation-filled walls to reduce internal reflection and sound bleed; and a theater that uses hanging baffles with other acoustic elements.

A positive experience for all

It was important to the Wild Music team that an exhibition about the deep roots and universality of music be broadly accessible and offer a rich and positive sonic experience. Not content with containing, controlling, and interpreting a collection of sounds, we decided to approach the entire exhibition as a soundscape—or, more exactly, three interconnected soundscapes.

Because the songs of birds, whales, and people are key strands in the biology of music, we organized much of the exhibition into thematic areas we called the Edge of the Forest, the Town, and the Ocean Deeps. Each is anchored by a schematic “set” and distinguished by a composition by environmental sound artist Philip Blackburn. The compositions create an acoustic niche both for exhibits that can be heard at a distance (such as a giant wooden xylophone) and for visitors’ conversations.

These themes were extended in a teacher workshop and public programs held when Wild Music opened. Whale expert Roger Payne, one of the project advisors, spoke about his research and played recordings of whale songs; we had to rent speakers capable of transmitting the vibrations of their deep bass notes throughout the museum. A local gamelan performed bird-related Indonesian compositions, and SMM’s teen volunteers shared pocket science demos with visitors.

Wild Music opened at SMM in March 2007. As it moves to the North Carolina Museum of Natural Sciences in June, we are just beginning to explore the possibilities for reaching new audiences through its rich sound experiences and themes. Evaluation suggests some fine-tuning that will help improve the visitor experience, but in general the response has been overwhelmingly positive. Visitors are telling interviewers that they appreciate the tactile experiences and the presence of Braille and acoustic labels, even though most haven’t used them themselves.

Wally Waranka reports that this is the first exhibition he feels he can navigate and enjoy almost entirely on his own. In fact, he has brought his colleagues in the employment agency to visit, hoping to inspire their approach to workplace accommodations.

From the July/August 2007 issue of ASTC Dimensions.

More about Wild Music and the exhibition tour