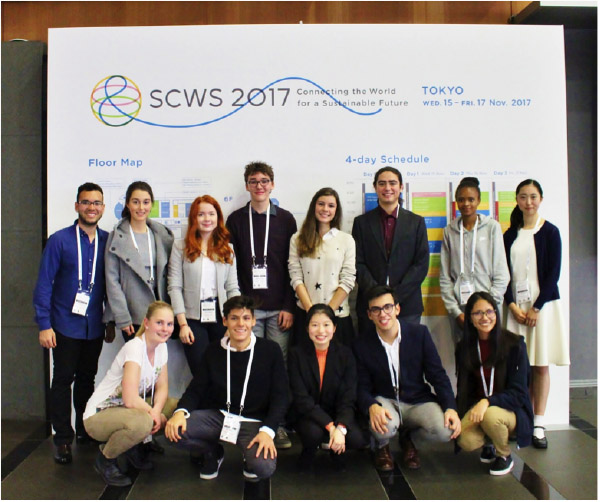 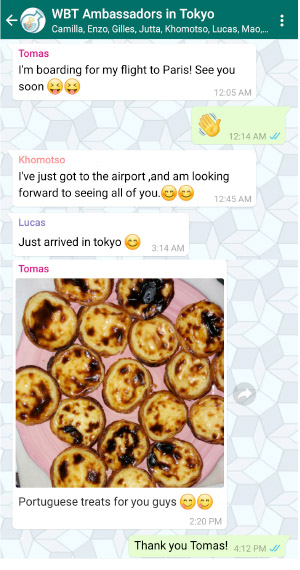 “I’ve just go to the airport, and am looking forward to seeing all of you =)=)”

As more of these messages and photos from the World Biotech Tour (WBT) ambassadors began to populate the group’s WhatsApp chat thread everyone started to realize that it was finally happening—the ambassadors were meeting in Tokyo for the Science Centre World Summit (SCWS), November 15–17. The event was a unifying culmination of the sprawling, multi-city, multi-year WBT, a three-year project that involved 12 science centers from around the world participating in a year-long program in their regions that celebrated biotechnology and science communication to the public and students.

Sponsored by the Biogen Foundation and managed by ASTC, the WBT made stops on six continents, with a diverse range of festivals, public programs, hands-on activities, connections to exhibitions, community partnerships, and other platforms that promoted public engagement with biotechnology in 2015, 2016, and 2017. In each city, the host science center also selected a cohort of enthusiastic teenagers to become WBT ambassadors, a critical piece of each WBT stop and a unique global youth-science program. One young ambassador from each city was picked to represent her or his science center, region, and country in Tokyo during the SCWS.

At each of these 12 science centers, secondary-school students accepted in the WBT ambassadors program took part in a year-long training in biotech research while paired with a mentor. They also participated in science-communication training, with many opportunities to practice their knowledge and skills in schools, communities, and the public during events at their science centers. At the end of each WBT year, the science centers each selected one ambassador to represent the WBT ambassadors program and the science center at the SCWS in Tokyo. Those selected were the most active and committed students in their program. The teens traveled to Tokyo to promote the youth program and to take part in a rare opportunity to meet similar peers from around the world and learn about a culture very different from their own. 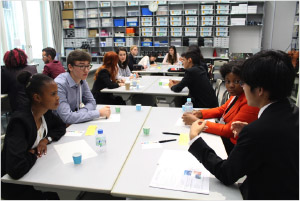 Along with two teens from the Women in Natural Sciences program, the ambassadors were the only youth represented at the SCWS. ASTC and the SCWS took this opportunity to hear from the teens directly by having a youth workshop where the teens could discuss with each other what it is they most want from science center youth programs. Their ideas were later shared at a SCWS session, “Connecting and Empowering Youth.”

The SCWS is a global meeting of science centers and museum professionals, and their networks from around the world, convened once every three years. As the world becomes more interconnected, global issues have arisen that concern us all. An underlying theme throughout the summit was the need to co-design and collaborate across borders, cultures, and religions in order to conquer the immense and overwhelming task of solving these global issues. Youth will play a big part in creating a sustainable future, so having our young adults there to speak up for youth engagement and empowerment was a unique and rare experience, both from summit attendees and also for the teens. During the three days at the SCWS, the teens moved continuously through speeches, sessions, posters, demos, tours, workshops, and Japanese cultural experiences. Through it all they worked together, sharing their own cultures with each other in late-night conversations; discovering differences; and connecting through similarities, such as their shared love of Japanese food. 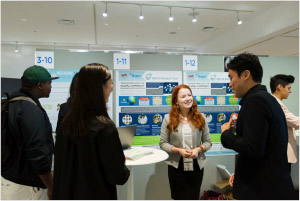 You could see the ambassadors’ communication training in full effect when they stood up and presented their ideas in sessions in front of audiences full of directors, experts, and industry leaders. The three ambassadors from the Asia Pacific Network of Science & Technology Centres (ASPAC) region also amazed summit attendees by sharing their experience in the WBT program in front of all 828 SCWS participants from 98 countries and regions during the ASPAC special session (watch video here).

“. . . the WBT made me chose what I would like to work with and study for the rest of my life, which is biotechnology. But, after this trip, I started to thinking about how important science communication is and the possibilities that this topic can do for our science community here, in Brazil.”
—Lucas, 19, from Rio de Janeiro, Brazil (Museu da Vida – Fiocruz)

“For me, we have reached the goal of the summit: connecting the world for a sustainable future. We made friendships that cross borders, cultural differences, and the language barrier. To me that proves that if more young people came together they could form more friendships and together change the world in a positive way.”
—Gilles, 17, from Mechelen, Belgium (Technopolis, the Flemish Science Centre)

“I was amazed how people came to us to ask for the World Biotech Tour, and they wanted to know what we had done, our experiences and our comments.”
—Mario, 18, from Milan, Italy (National Museum of Science and Technology Leonardo da Vinci)

“Being able to speak to very influential people I felt that I was able to bring my opinions out to people who may not view the world in a similar way. I felt that at least in the panel discussion several science centers realized the changes they could make in their programs by listening to the age group for which they are targeting their program. I felt that we, as teenagers, truly had the chance to change some programs and the way they are assembled . . . I can say that I left Tokyo with 14 new friends from 11 countries and 6 continents.”
—Ronja, 17, from Vantaa, Finland (Heureka, the Finnish Science Centre)

“I also have a potentially new exciting science thing happening in my life that . . . resulted from my involvement with the WBT. I’ve kept in touch with my mentor Danka, who works at the Lions Eye Institute, which is an Australian medical research institute focusing on ophthalmic care, and she’s currently thinking of starting an outreach program.”
—Shiya, 18, from Perth, Australia (Scitech)

“Getting to know each and every ambassador also meant getting to know their cultures. There wasn’t one day during which some of us wouldn’t say ”in my country we . . . .” The sharing of traditions, dishes, sayings, difficulties, and achievements was constant, which allowed us to become aware of the divergences among our countries but, most of all, that even if you are on the other side of the world, you will always have something in common with someone. Most of the issues societies face today are global. Corruption, terrorism, defective educational systems, and ”OMG my boyfriend/girlfriend just texted me saying I need to talk to you“ are global, and the more we talked, the more we realized that working together towards a goal is better than working alone . . . after five days, they were like family to me.”
—Tomas, 19, from Lisbon, Portugal (Pavilion of Knowledge – Ciência Viva)

“Being able to share my experience at the World Summit changed my attitude. Before I thought that I am just a little girl in this world, I have no voice to change anything. Now I think that I cannot change everything in this world but I have a voice to encourage people to do something good for others or our world. Everyone has a voice but not everyone use their own voice in the right way.”
—Mild, 17, from Pathum Thani, Thailand (National Science Museum, Thailand) 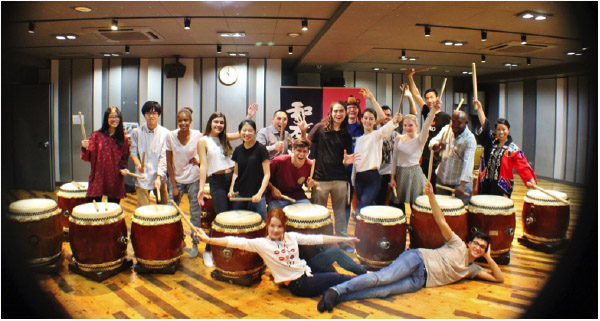 The ambassadors went on a cultural tour of Tokyo on the last day of the summit. They learned how to play the Japanese taiko drum as a team, try Japanese food, learn about samurai history, and meet Biogen employees at the Biogen office in Nihonbashi, Tokyo.

Carlin Hsueh is project manager of ASTC’s World Biotech Tour, a three-year global initiative
showcasing the impact of science centers in bringing together key stakeholders to promote
public engagement in the science, technologies, and societal issues related to biotechnology.