The second edition of ASTC On Air was streamed live online on Tuesday, April 21, 2015. This edition featured Tim Slingsby, advisor on public engagement with science at the British Council. (Watch the recording below) 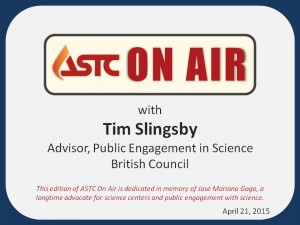 Tim Slingsby is a highly skilled science communicator with wide-ranging experience in academia and in both the public and private sectors. He is a specialist in international collaboration with a keen interest in international development, as well as expertise in global policy, public engagement, and STEM education initiatives. One of the British Council’s five charitable purposes is to encourage cultural, scientific, technological, and other educational cooperation between the United Kingdom and other countries. The British Council advances its mission in many ways, including STEM education initiatives, work with science and the arts, research partnership programs, policy dialogues, supporting institution capacity building, and skills development for early career researchers. They recently published an extensive report on their 70 years of international activity, including their work on public engagement with science.

During this edition of ASTC On Air, Slingsby discussed the British Council’s work, as well as his opinions on public engagement with science and science diplomacy, among other areas. A recent report from the Pew Research Center on the differing views of scientist and the public on science and society was discussed as well.

Watch the recording of ASTC On Air with… Tim Slingsby below.

You can find a recap of the first edition of ASTC On Air featuring Rane Johnson-Stempson, including how to set up a free screening of Microsoft’s film “Big Dream,” plus the recording at www.astc.org/events/join-us-astc-air-rane-johnson-stempson.