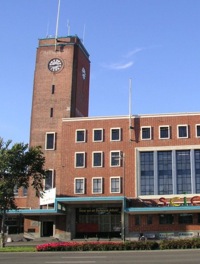 On September 4, a 7.1-magnitude earthquake struck Christchurch, New Zealand. No fatalities have been reported, but there is extensive damage to homes and businesses in the region, including ASTC-member Science Alive.

Earlier this week, the Science Alive building was deemed safe and key staff returned to work. With no damage to exhibits, they had hoped to reopen the center to the public this weekend, but aftershocks have further damaged the building’s clock tower. The building is now completely closed and will remain so until an engineer’s report can secure the tower and guarantee its safety. In the meantime, the staff is looking into ways to continue operating their school outreach programs.

“We thank everyone for their support,” writes Science Alive CEO Neville Petrie. “Their messages are comforting, and it has reinforced the wonderful, friendly environment that exists in the science center movement.”

Neville Petrie reports, “Science Alive was closed for nine days while the building was checked over by engineers. We suffered extensive cracking in walls throughout the building, but this has not affected the strength of the main structure. The main concern was the cracking that occurred in the clock tower. Work has started on covering the damaged brickwork with large frames to prevent falling debris. This temporary measure will give engineers an opportunity to plan the major repairs that will be needed to restore the clock tower. The majority of the other damage is superficial, but it will take some time to repair, replaster, and repaint. We are hoping to get national TV coverage of the work beginning on the clock tower and hope to have a ceremonial restarting of the clock when that is complete. Our clock is one of two significant public clocks in Christchurch, so we think it could be a symbolic restart. We are hoping all this will encourage visitors to come in and see the earthquake exhibits that we have been able to get out on the floor and start to push up visitor numbers again.”

About the image: Science Alive’s clock tower was damaged by recent earthquakes.