Another edition of ASTC On Air with was streamed live online Monday, May 18, 2015. This time, we interviewed Lidia Brito, Director of UNESCO Regional Bureau for Science in Latin America and the Caribbean. (Watch the recording below.) 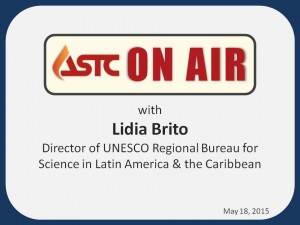 Lidia Brito has expressed significant support for the science center field worldwide. She was a keynote speaker at the 4th Science Centre World Congress in Rio de Janeiro, Brazil and supported the capacity building workshop in preparation of the 6th Congress in Cape Town in 2011. Brito is passionate about science education and finding new ways to bring education to those without access. In her current position in Uruguay, she is striving to implement UNESCO’s global priorities in the Latin American and Caribbean region through the promotion of sustainable development. She is a champion of building networks of knowledge that bring together science, policy, and society. During this edition of ASTC On Air, we chatted with her on the importance of science and technology for Latin America and what larger role education can play. We also discussed the role science centers can have in the global learning ecosystem and how science centers and UNESCO could potentially work together to help strengthen the field and support UNESCO’s mission.

After earning a doctorate in forest and wood science from Colorado State University, Brito was a professor for wood science at Eduardo Mondlane University in her home country of Mozambique. She has served as director for science policies and capacity building for UNESCO, minister for higher education, science, and technology of Mozambique, and advisor for strategic planning and external relations for the mayor of Maputo City. In 2012, Brio co-chaired the Scientific Organizing Committee for the Planet Under Pressure conference in London.

What the recording here: