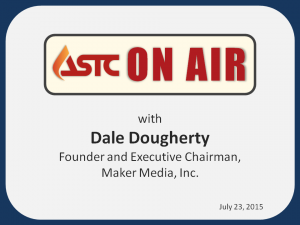 Another edition of ASTC On Air was streamed live on July 23. This time, we spoke with Dale Dougherty, founder and executive chairman of Maker Media, Inc. (Watch the recording below.)

Maker Media is “a global platform for connecting Makers with each other,” and is also the organization behind Make: magazine and the producer of Maker Faire. As founder and executive chairman, Dale Dougherty is an integral part of Maker Media’s content and strategy. In this edition of ASTC On Air, we discussed various aspects of the maker movement, such as making in science centers and communities, what participants learn in maker spaces, and the future of the movement.