Why should museums care about representation? 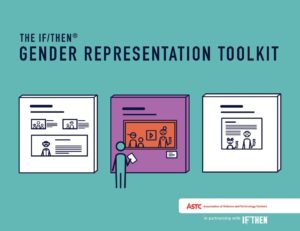 According to the 2017 Museums and Public Opinion report, 97% of Americans believe that museums are educational assets for their communities. Science centers and museums are regarded as highly credible sources of information by 78% of Americans, while 74% of Americans believe science centers and museums should recommend actions or behaviors (National Awareness, Attitude & Usage Study, 2010). The overwhelming majority of public trust in museums as institutions of moral standard and education, places science centers and museums in a position of opportunity to make a sizable impact on the representation of women and gender minorities within STEM. It is important for museum visitors to see diversity in the STEM workforce. The gender gap in STEM fields, coupled with persistent gender stereotypes, can negatively impact girls’ understanding of their abilities (MacTavish, E.R., 2016) and discourage women from pursuing jobs in STEM fields (Cheryan, S., Master, A., & Meltzoff, A. N., 2015). The conscious action of including an equitable and diverse representation of gender within museum content is a continued step in challenging stereotypes and encouraging public conversation around understanding gender.

Beginning in March 2020, all science centers and museums that have submitted their collected data will be invited to apply for an IF/THEN® Gender Equity Grant. IF/THEN® grant funds can be used for a variety of projects that will increase gender representation in your museum’s content. After the first round of IF/THEN® Gender Equity Grants in March 2020, we plan to conduct a second larger round of IF/THEN® grants beginning in late summer of 2020. In total, ASTC plans to award $600,000 to museums for projects that improve representation of women and gender minorities in STEM.

How can we fix the issues we found?

In addition to being eligible to apply for IF/THEN® grants to work toward more equitable gender representation, museums that undertake the assessment process will have access to these helpful resources:

Participating in the assessment process will galvanize your efforts to address gender equity in your institution by providing data that will enable you to better identify areas for improvement, establish goals, and develop strategies for continued growth.

What is ASTC doing with the data we collect?

All data provided by participating museums will be kept confidential and only reported in aggregate. You can expect to have initial results by October 2020 and a final report by May 2021, which will be shared with all participants.

Our data entry spreadsheet will collect the data from your additional categories. While the focus of this project is on gender representation, we know this is not the only type of representation that matters. As a whole, minority groups are often underrepresented in STEM fields and minority women account for only one in ten employed engineers and scientists (National Science Foundation, 2016). Reporting the additional categories chosen by your museum can help identify additional representation gaps and inform decisions about future directions for this work.

What if I chose the wrong gender?

The purpose of this tool is not to decide what someone’s gender identity is, but instead capture your personal perception of gender as it appears in your museum’s content. In conducting this assessment, we are unable to ask the people in the images about their gender, so it‘s OK if you mark a person in a gender category different than how the person might identify. This process isn’t perfect, and each person’s perception of gender comes from their own understanding of the world around them, based on their unique life experiences and personal identity surrounding things like culture, gender, race, and sexuality.

Should I count someone as a STEM professional if they don’t look like it, but the text says they are?

Yes! STEM professionals can be identified through text, clothing, tools, action, or any other context clues that indicate they work in a STEM field.

What careers can be considered as STEM Professionals?

Anyone who uses science, technology, engineering, and/or math regularly in their career can be considered a STEM professional. This includes a wide range of careers and topics from social sciences, medicine, science museum educators, and more. We know there might not always be a clear answer if a photo depicts a STEM professional. Do your best and ask yourself “would a visitor see this person as a STEM professional?”.

How do I know what part is the space and what is the element?

The space and element can be defined by the data collection team. For large exhibits, you may choose define a whole hall (like the life science hall) as the space, and one exhibit component as an element (like the DNA interactive). For smaller exhibits, you may choose to define the entire exhibit as both the space and the element. The goal of making these designations is to make it easier for data collectors to tell what areas have been counted and what areas have not.

What roles are necessary to use this tool?

The primary roles we suggest are one toolkit coordinator, one data reporter, and two or more data collectors. In small museums, there may only be one person who serves in all of these roles. In large institutions, there may be multiple data collectors from many different departments within the museum.

What if we can’t control the images we use (such as having an exhibit on past U.S. presidents who are all men)?

We know you may not be able to control the gender representation in certain exhibits, but we still would like to collect data that includes these exhibits. If an exhibit has content that cannot be changed, you may consider including additional content nearby that connects to the exhibit and highlights other genders as a way to increase representation and knowledge. For example, if your exhibit is on presidents and showcases only men, you could add panels nearby highlighting notable women in politics.

Can we email data as we collect it, sending the same spreadsheet multiple times?

We encourage you to send all data at once, but we understand that you may need to add to your data. If you do, please email us so that we may combine both sets of data from your institution.

Email your questions to the team!