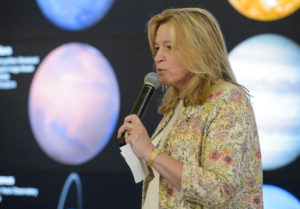 This interview appeared in the May/June 2018 issue of Dimensions magazine.

Ellen Stofan, the former chief scientist of NASA, recently accepted the position of John and Adrienne Mars Director of the Smithsonian’s National Air and Space Museum in Washington, D.C. Stofan spoke with Dimensions about her new role and why the museum, and all science centers, mean so much to her.

Listen to the podcast here