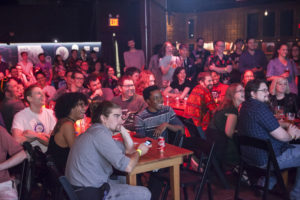 By Peter Linett
From Dimensions
March/April 2018

These are scary times for those of us who care about reason, objective facts, and the status of science in society. On some days it feels like we are indeed living in a “post truth” era, especially in the political sphere. And political ideology and identity increasingly seem to be the whole shebang, the lens through which we each see the world, prior to understanding it or judging it.

Yet at the same time, and perhaps for related reasons, science is having a pretty impressive cultural moment. I recently spent an evening at a new venue on Manhattan’s Lower East Side called Caveat, which is owned by physicist-turned-TED-Talks-editor-turned-science-communication-entrepreneur Ben Lillie. Back in 2010, Lillie co-founded The Story Collider, a series of live science-storytelling events and podcasts (think The Moth, with topics like “how I almost burned down the lab in grad school”). He and his collaborators have become part of a burgeoning national and international community of hip, mostly young, culturally creative science-engagement producers and communicators, many of whom (like Lillie) have backgrounds in both STEM fields and the arts. Sensing a need in New York City for a small, informal venue for those kinds of events, podcast recording, and general creative experimentation, Lillie renovated a basement space to create a welcoming cross between a Victorian explorer’s study and a 1970s nightclub, and opened Caveat in early 2017.

To say it’s been a success understates the latent demand that Lillie and his Caveat colleagues have tapped into—demand for what their website calls “playful, intelligent nightlife.” Their calendar is packed with comedy nights, quiz shows, drinking games, author interviews, beer-fueled writing workshops, and podcast tapings, some but not all science-themed. The night I attended, the vibe and crowd were terrific: relaxed, welcoming, fairly diverse, not exclusively young, and palpably engaged both intellectually and emotionally with what was going on at the mic—and with each other.

A kindred vibe and mission are fueling the growth of science-engagement programs around the world, from the Nerd Nite network of goofy-butreal lectures on science and other topics, now occupying bars and pubs in more than 100 cities around the world, to the London- and NYC-based Guerilla Science, which, among other things, produces creative (sometimes transgressive) science-themed experiences in places where you wouldn’t expect them, like rock music festivals (full disclosure: I’m on Guerilla Science’s advisory board). The science-comedy intersection is lively on both sides of the Atlantic: In the live-show/podcast/NatGeo series StarTalk Radio, astrophysicist Neil deGrasse Tyson banters with comedians Eugene Mirman, Chuck Nice, and others, often while interviewing A-list figures from music, film, sports, and politics. In the similarly structured Infinite Monkey Cage, from the BBC, particle physicist Brian Cox (who could be described as the British Neil deGrasse Tyson, except that Tyson was never a rock keyboard player) jokes with comedian Robin Ince and guests.

The IFL Science empire, founded by Elise Andrew in 2012 and now part of the everyday social-media diet of more than 25 million people on Facebook, also emphasizes “the funny side of science” with “quotes, jokes, memes and anything your admin finds awesome and strange.” YouTube has made science stars out of affable, topic-hopping nerds like Henry Reich (MinutePhysics), Hank Green (SciShow and, with his famous-author brother John Green, the VlogBrothers), Vi Hart, and others. Hollywood regularly helps popularize complex topics like general relativity (Interstellar) and planetary science (The Martian), invariably by personalizing and concretizing them in engaging characters and stories we care about.

Then there’s the influential and hard-to-categorize Radiolab phenomenon, which earned co-host Jad Abumrad a MacArthur “genius award” in 2011 for (in the words of the MacArthur Foundation at the time) “employ[ing] his background as a composer to orchestrate dialogue, music, and sound effects into compelling documentaries that draw listeners into investigations of otherwise intimidating topics, such as the nature of numbers, the evolution of altruism, or the science of emergent phenomena”—a form that “often mimics the scientific process itself, complete with moments of ambiguity, digressions, reversals, and surprising conclusions that evoke in audiences a sense of adventure and recreate the thrill of discovery.”

I could go on, but you get the picture. What’s striking about this new landscape of culturally creative science communication, when you start wandering around in it, is how different its goals and assumptions are from those of most science centers and the informal science learning community. It’s not just that its focus is adults rather than families and kids. It’s that its practitioners, by and large, don’t think of themselves as being in the business of “learning” at all. They don’t use phrases like “learning outcomes,” except reluctantly and somewhat self-consciously when funders require them in grant proposals. They’re not trying to edify the public about particular scientific issues or change STEM-related opinions or behaviors (except in idiosyncratic cases). They don’t go to conferences like the National Academies’ Sackler Symposia on the “Science of Science Communication.” And with the exception of Neil Tyson, they don’t spend a lot of energy insisting on the objectivity of scientific truth. On the contrary, they celebrate the subjectivity of science—and they strategically leverage that subjectivity for cultural relevance.

Which makes sense, because what they are in the business of doing is mainstreaming science in contemporary culture: embedding and normalizing it within the set of things people identify with, enjoy, imbibe, and want to know more about. Tyson has spoken eloquently about this goal, and it is shared by many of the practitioners mentioned above (something I learned in 2013 at the Evolving Culture of Science Engagement, a gathering I coorganized with several faculty members at MIT; a report is available here). “Mainstreaming” is how one of the most active funders in this area, the Alfred P. Sloan Foundation, describes its public engagement goals on its website. And Sloan is part of formal and informal networks with the Simons Foundation, the U.K.-based Wellcome Trust, the Rita Allen Foundation, the Kavli Foundation, and other funders that have been advancing science communication along these lines.

By subjectivity, of course, I don’t mean “everyone’s entitled to her own facts.” Far from it. I mean shining a light on the scientist’s (or science communicator’s) relationship to the facts, illuminating the teller as well as the tale. I mean acknowledging and celebrating the fact that science is a lived, warm-blooded human experience, an enterprise not just of facts and abstractions but of people and personalities, of pride and pain and fun and lust and loss and joy and confusion, and everything else that makes us all tick. Performers at The Story Collider mic aren’t giving a lecture, however friendly (and however authoritatively they give lectures in their day job); they’re revealing themselves, often intimately and vulnerably. Neil Tyson isn’t trying to be a mere conduit to science; he’s trying to be an active, authentic presence, a personality who draws newcomers to science in part because they enjoy identifying with and spending time with him. (This is a decent definition of “celebrity scientist.”) It’s also why he works with comedians, and why the phrase “science comedy” isn’t an oxymoron: once we accept the importance of subjectivity in science engagement, humor is an obvious, even necessary component of the engagement experience because it’s a big part of how we humans connect with and enjoy each other, form communities, play, and (yes) learn.

Or think about how many strands of subjectivity are interwoven in any Radiolab story, often in rapid, unpredictable sequences of voices: hosts talking with the producer, producer talking with multiple interviewees, a counterpoint of conversations among people with differing sensibilities, recorded at different times and possessing different levels of awareness of where the whole thing is heading.

I think that what these science communicators, producers, and entrepreneurs understand is that this kind of subjective expression of, and public connection with, science isn’t the opposite of objectivity, it’s a precondition for it. Framing the enterprise of science as warm-blooded, personal, and therefore necessarily idiosyncratic is what allows nonexperts to get closer to it, to identify with and enjoy it, and let it gradually become part of how they see themselves and the world. It’s about modeling, in a way that the rest of us can relate to, what it looks like to believe in and make progress by means of reason, evidence, skepticism, wonder, and a naturalistic worldview. Crucially, it’s about not equating naturalism and objectivity with dryness or Spock-like detachment—which is exactly how science used to position itself, with a few vivid exceptions (Carl Sagan, Albert Einstein, Michael Faraday).

Unfortunately, we don’t have much evidence ourselves about how all this works, or even if it works. Both the informal science learning field and the issue-focused science communication field have fairly robust research literatures. But you won’t hear much if anything about humor, storytelling, personality, fun, or beer at those Science of Science Communication symposia, nor elsewhere in the discourse in either field. Scholars in various social science and humanities disciplines study laughter, performance, celebrity, emotion, identification, socially participatory environments, and other relevant phenomena, but vanishingly few do so in the context of science engagement. The foundation leaders and program officers who have so astutely supported the mainstreaming of science have so far shown little interest in studying its mechanisms to understand how—and for whom—they work, how participation patterns and identification with science are changing over time, or how engagement strategies could be improved to bring more people into the science-as-culture tent.

This is a bit surprising to me. Shouldn’t we who care about science be good empiricists and do the research? Still, there’s plenty of insight and inspiration that science center and museum professionals can draw just from looking at public engagement through that cultural lens and asking what their exhibits and programs might look like if mainstreaming rather than learning were the animating principle. Learning would still go on, to be sure, as it does every night at Caveat and the other contexts and programs mentioned above. But it might be a broader, more omnidirectional kind of learning, less about the facts and first-this-then-that narratives of science and more about the relationship of science to “my” identity, community, and sense of self. It could point us in some promising directions.

Peter Linett is the chairman & chief idea officer of Slover Linett, a social research and evaluation firm for the cultural sector, broadly defined.

About the image: A relaxed audience enjoys the performance at Caveat, a “speakeasy stage for intelligent nightlife,” in New York City. Photo courtesy Ayano Hisa.